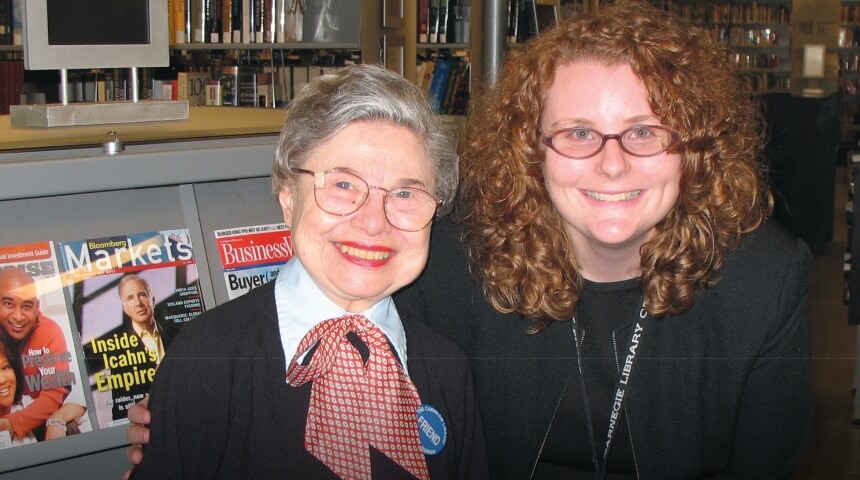 She was born in Romania and emigrated, along with her parents and younger brother, to the U.S. before the start of World War II. The family settled in Pittsburgh’s Hill District neighborhood, joining relatives who had made the trek years earlier.

Although Anita Newell was only four years old when she arrived, she knew that her life’s journey was truly just beginning. “To learn was number one for us,” Anita said in a 2017 interview for the Carnegie Mellon University Oral History Program.

Sadly, Anita passed away this past May, but thanks to her generous bequest to Carnegie Library of Pittsburgh, generations to come will be able to share her passion for learning.

“She loved books,” says Fran Lefkowitz, Anita’s friend and executrix of her estate. “She loved the Library and she loved education.”

Anita’s pursuit of knowledge took her to Carnegie Tech (as CMU was known back in the 1940s) and Columbia University in New York. After earning her master’s degree in library science, she returned to Pittsburgh and found the job she had seemingly been waiting for all her life. For more than 30 years, she worked at the Westinghouse Research Library, eventually becoming the manager.

Even after Anita had officially retired from Westinghouse, she never stopped being a librarian. “She was a very active member of the Squirrel Hill Friends of the Library,” says Holly McCullough, Assistant Director of Programs and Partnerships at Carnegie Library of Pittsburgh. “She was delightful, one of the most intelligent people I ever met and such a big advocate for the things libraries do.”

For Anita, the American dream became a reality. And thanks to her generous support of the Library’s mission, dreams will continue to come true for others.

For more information or to inform us of your intent, contact Anne Lee, Manager of Special Gifts and Planned Giving, at 412.622.6276 or leeanne@carnegielibrary.org. Thank you.