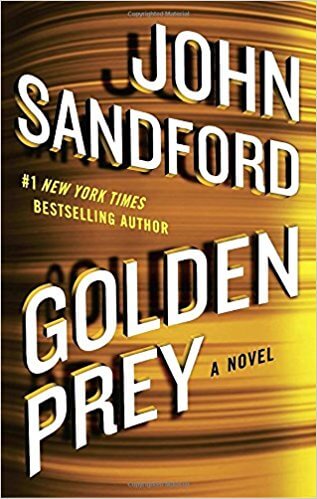 In the midst of all the action of an audiobook, sometimes we can forget what makes it all possible. Fitting then, that right smack dab in the middle of this Top Five is a book telling the story of the Talking Book service – how it came to be, how the service works then and now, and everything else in between. So this month, as we grab by the fist our heavy hitters (Sandford, Patterson, Baldacci and Jackson don’t mess around), make sure to think about how far we’ve come. We’ll see you next time in the Best of, keeping it keeping on.

Golden Prey
John Sandford
DB 87697 / CL 16618
Lucas Davenport–who left the Minnesota Bureau of Criminal Apprehension for the U. S. Marshals Service, where he gets to pick his own cases–investigates a Biloxi, Mississippi, drug-cartel counting-house robbery. Suitcases full of cash have disappeared, leaving behind five bodies, including that of a six-year-old girl. Unrated. Commercial audiobook. Bestseller. 2017.

16th Seduction
James Patterson
DB 87698
Fifteen months ago, Detective Lindsay Boxer’s life was perfect–she had a beautiful child, and her doting husband, Joe, helped her catch a bomber. But Joe wasn’t everything that Lindsay thought he was, and she’s still reeling from this as a wave of mysterious heart attacks claims victims across San Francisco. Unrated. Commercial audiobook. Bestseller. 2017.

The Fix
David Baldacci
DB 87562
Amos Decker witnesses a murder outside FBI headquarters. A family man shoots a female teacher execution-style, then turns the gun on himself. DIA agent Harper Brown orders Decker’s team to back off–the murder is part of an open investigation and is a matter of urgent national security. Unrated. Commercial audiobook. Bestseller. 2017. The Untold Story of the Talking Book
Matthew Rubery
DB 87099
The history of talking books. Covers the time from Edison’s invention of the phonograph through early efforts to provide reading options for the blind and the early twenty-first century audiobook marketplace. Discusses controversies, such as decisions about what to record and the preferred ways to narrate a talking book. 2016.

Expecting to Die
Lisa Jackson
DB 86916 / CL 16626
As Detective Regan Pescoli prepares for her new baby, her daughter Bianca stumbles upon a dead body in the woods while playing a chasing game with other high schoolers. But Bianca is pretty sure it wasn’t a human who was chasing her. Violence, strong language, and some explicit descriptions of sex. 2016.