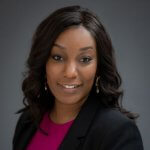 Eboné Lockyer is EVP, Total Rewards Executive at PNC, overseeing the compensation and benefits functions. In this capacity, Eboné and her team ensure that PNC’s total rewards programs are aligned to company strategy and culture.

Eboné joined PNC in 2012 and held positions across the enterprise, including roles within the supply chain group as well as the strategic initiatives office. In 2014, she joined the executive compensation team within Human Resources and held roles of increasing responsibility until being named the head of executive compensation in 2018. In March 2020, she assumed her current role as Total Rewards Executive. Eboné was appointed as Executive Vice President in February 2021.

Prior to joining PNC, Eboné spent 6 years in the consumer goods industry – in commercial finance at Heinz (now Kraft Heinz) and in retail category management at PPG Industries.