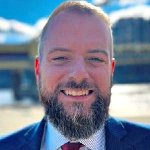 Jake Pawlak currently serves as Deputy Mayor for the City of Pittsburgh and Director for the Office of Management and Budget. Prior to joining the Administration, he served as Transition Director for Mayor Gainey.

Jake has worked at all levels of government, as well as on numerous civic advocacy efforts. In 2011, he was the Community Engagement Director for the “Our Library, Our Future” initiative that successfully campaigned for the library tax. More recently, Jake served as program director for the Pennsylvania Alliance Foundation. He also held roles with the Urban Redevelopment Authority of Pittsburgh and the Pittsburgh Water and Sewer Authority, where he was responsible for each Authority’s engagement with the Mayor’s Office, City Council, City Departments, and other government agencies and outside partners.

Jake received his Bachelor of Arts in Political Science and Economics from the University of Pittsburgh. A lifelong Pittsburgher, he currently lives in Highland Park.