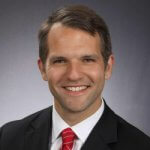 Justin Krauss is an Executive Director in Middle Market and Specialized Industries for JPMorgan Chase Commercial Banking, where he supports clients including traditional middle market companies and early-stage technology companies. Before joining JPMorgan Chase he worked in the Corporate Banking division at PNC and in the Global Executive Compensation group at Credit Suisse. Justin is excited to be part of the Board of Trustees for the Carnegie Library of Pittsburgh, as libraries have played an important role in every chapter of his life, and he is committed to helping to strengthen this essential institution.

Justin received his BA from the University of Pittsburgh, and his MBA from the Tepper School at Carnegie Mellon University. He’s an active member of the Tepper School alumni network, a runner, and a youth soccer coach. Justin’s earlier career as an actor included many professional stage and television productions, and he is a member of the Actor’s Equity Association. He lives in Squirrel Hill with his wife, Valentina, and their three children.