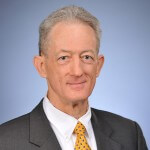 Russell Ayres retired in April 2015 as Vice President and Associate General Counsel of The Hillman Company, having joined the Company’s Law Department in 1983. At Hillman, Russell’s experience included mergers and acquisitions, venture capital and private equity transactions, and service on boards of directors of public and private companies. Before joining Hillman, Russell was an Associate in the Corporate and Banking Group at Reed Smith, specializing in project finance, mergers and acquisitions, and equipment leasing transactions.

An avid amateur piano and harpsichord player, Russell previously served on the board of directors of Renaissance & Baroque, including a term as President, and recently joined the board of Chamber Music Pittsburgh. He has also served as Senior Warden and a member of the Vestry of Calvary Episcopal Church and is currently a member of the Board of Trustees of the Episcopal Diocese of Pittsburgh.

Russell has an AB degree from Princeton University, an MA in Mathematics from the State University of New York at Stony Brook, and a JD from Harvard Law School.