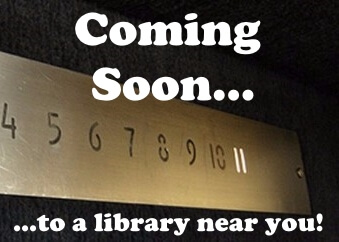 Today we’re featuring a few items that will be hitting Library shelves over the next few weeks. These movies and books are available now to place on hold through our catalog or you can try your luck with the Best Seller collections on their release dates. For even more upcoming and newly released books, movies and music, check out the Books & Media page on our website!

La La Land (DVD, Blu-ray) – This almost Best Picture winner will be available on April 25. Director Damien Chazelle’s love-letter to Hollywood stars Emma Stone as an aspiring actress waiting for her big break and Ryan Gosling as a jazz musician trying to stay true to his passions. It’s easy to find nods to classics like Singin’ in the Rain as the two main characters navigate their careers and romance. Check out the soundtrack and score — both are also available on Hoopla!

I Am Not Your Negro (DVD, Blu-ray) – Nominated for the Best Documentary Feature Oscar, this film uses Remember This House, an unfinished manuscript by James Baldwin, to examine the lives and deaths, of Medgar Evers, Malcolm X and Martin Luther King, Jr. Director Raoul Peck gives Samuel L. Jackson the honor of narrating the film. A companion book, edited by director Peck, includes Baldwin’s work on Remember This House, along with other essays, letters and notes that informed the film is currently available. The film will hit library shelves on May 2.

Anything is Possible by Elizabeth Strout – A companion to last year’s My Name is Lucy Barton, Strout’s new book takes the same collected story approach that she used in Olive Kitteridge. Of the new book, she said, “As I was writing My Name Is Lucy Barton, it came to me that all the characters Lucy and her mother talked about had their own stories—of course!—and so the unfolding of their lives became tremendously important to me.” The book will be released on April 25.

Astrophysics for People in a Hurry by Neil deGrasse Tyson – Tyson’s newest science book endeavors to make complicated concepts accessible to those of us who don’t hold advanced degrees in astronomy and astrophysics. This 144-page book instead offers bite-sized explanations of the Big Bang, black holes and more—just enough to understand whatever comes next out there in the universe.

What are you looking forward to reading and watching in the next few weeks?

Explore more of our new additions!