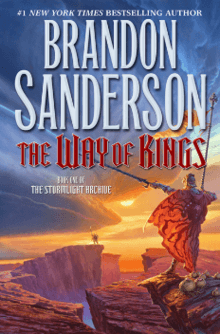 Epic Fantasy: the genre that promises quests, long books, probably long series, and possibly the death of the author before they are finished writing.  That last one is annoying, but I love these things like no other books I read.  There are the massive world-building epics of Brandon Sanderson,  J.R.R. Tolkien, C.S. Lewis, Robert Jordan, and many more.  Those are my favorite in the genre if you couldn’t guess.  This is the genre that gave birth to Elves, Dwarves, Dungeons & Dragons, along with Sword and Sorcery as its own genre, and so much more.  If you love Fantasy at all this is the genre to thank.  It made it all possible.

Our catalog has a good selection of Epic Fantasy, including those authors I fired off earlier.  The books range from:

The Way of Kings
By Brandon Sanderson
On storm-swept Roshar, cities are built in locations that are sheltered from the tempests and wars are fought over shardblades and shardplates–mystical armor that transforms men into fearsome warriors. Accused of desertion, Kaladin fights for his freedom in a battle on the Shattered Plains.

The Eye of the World
By Robert Jordan
“The Wheel of Time turns, and Ages come and pass…there are neither beginnings nor endings…” Trollocs arrive in Emond’s Field to capture three young boys–sheepherder Rand, rascal Mat, and blacksmith Perrin–born within a specific time frame. The villagers rally to protect the three, unaware that it is time to fulfill a prophecy within the Wheel of Time. Some violence.

The Fellowship of The Ring
By J.R.R. Tolkien
As the Ring cycle begins, Frodo, a home-loving hobbit, inherits the magic ring that his Uncle Bilbo brought back from his adventures in The Hobbit (DB 48978). To protect the ring from the powers of darkness, Frodo must make a long, dangerous journey. Prequel to The Two Towers (DB 47487).

A Wizard of Earthsea
By Ursula Le Guin
An intricate fantasy about Sparrowhawk, a talented but arrogant student of wizardry. On a rival’s dare, Sparrowhawk summons up a shadowy, evil spirit who threatens both the boy’s life and the entire world of Earthsea.

These four are all the first in a series that is well done.  Reading any of them is a good time.  There are so many more you could read, but I only have so much room and I’m out of it.