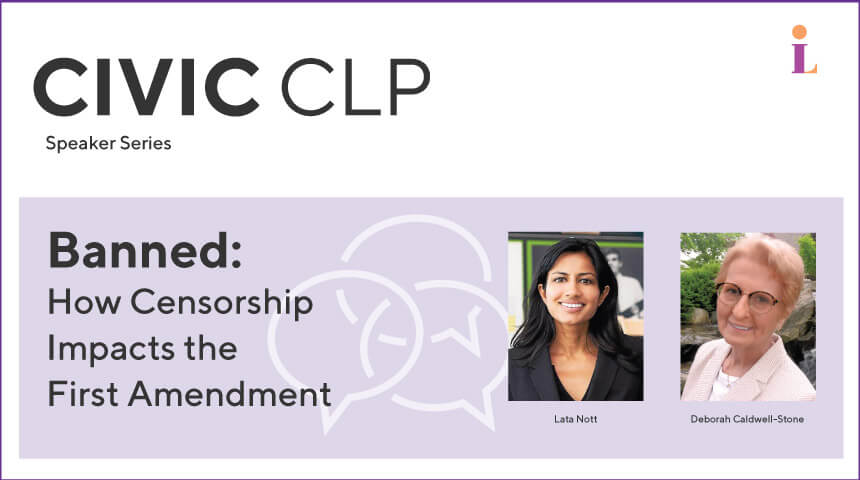 Freedom Forum fellow for the First Amendment, Lata Nott, will share her expertise on how censorship and suppression impedes our First Amendment rights on social media, in schools and through voting rights. Deborah Caldwell-Stone, Director of the ALA Office for Intellectual Freedom and Executive Director of Freedom to Read Foundation, will join the conversation to share her expertise on why Banned Books Week is more than just a seven-day event, as well as spotlighting the ways that the American Library Association’s Office for Intellectual Freedom works to fight literary censorship on a daily basis.
About Lata:
Lata Nott is a Freedom Forum Fellow. Nott formerly was the assistant director of admissions at the Georgetown University Law Center, where she implemented strategies to increase diversity, promote the scholarship program for high-need students, and integrate technology into the Law Center’s recruitment efforts. Prior to that, she was a litigator in New York City at the law firms of Proskauer Rose and Chadbourne & Parke. In addition to her commercial litigation practice, she maintained an active pro-bono practice focused on asylum cases, and developed a proficiency in legal issues surrounding the Internet, data privacy, and cybersecurity, frequently contributing to Chadbourne & Parke’s technology law blog. She graduated from the University of California, Davis, summa cum laude, Phi Beta Kappa, with a Bachelor of Arts in international relations. She earned her Juris Doctor from Columbia Law School in 2010. At Columbia, she was a staff editor on the Human Rights Law Review and chair of the South Asian Law Students Association. She remains an active member of the New York Bar and the American Bar Association.
About Deborah:
Deborah Caldwell-Stone is Director of the American Library Association’s Office for Intellectual Freedom and Executive Director of the Freedom to Read Foundation.  For the past two decades, she has worked closely with libraries, librarians, and trustees to address a wide range of intellectual freedom issues, including book bans, internet censorship, meeting room policies, and the privacy of library users’ records. In addition to directing the work of the Office for Intellectual Freedom, she advises ALA’s Intellectual Freedom Committee and its Privacy Subcommittee on law and policy concerns and has served on the faculty of the ALA-sponsored Lawyers for Libraries and Law for Librarians workshops. She is a contributor to the 10th edition of the Intellectual Freedom Manual and other publications.  She is a former appellate litigator.