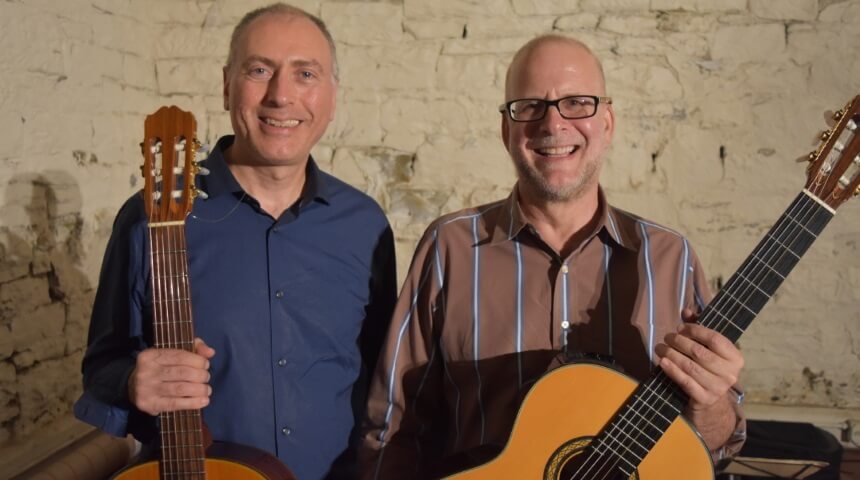 The FERLA-MARCINIZYN GUITAR DUO “compile what is easily the most diverse set list in town” (John Hayes, Pittsburgh Post-Gazette).

Pittsburgh-based guitarist, composer, banjoist John Marcinizyn performs frequently as a soloist, with contralto Daphne Alderson, in the Ferla-Marcinizyn Guitar Duo, Duo Cieli (flute and guitar duo), The Red Hot Ramblers (Dixieland jazz) and groups ranging from The Bach Choir of Pittsburgh to Billy Price. His versatility as an acoustic and electric guitarist allows him to perform in many styles including classical, jazz, flamenco, rock, blues, and folk. John has also performed guitar and banjo for many theater companies. His playing can be heard on eight CDs and one DVD. His Latest CDs are “Blue Ride” (a collection of original instrumentals), and “Duo Cieli-North Side Sessions” (music for flute and guitar with Tara Yaney).

John’s compositions have received numerous performances and include a guitar concerto, string quartet, orchestral music, music for theater, and pieces for solo guitar and guitar with mixed ensemble, as well as a number of jazz and rock pieces. His compositions and commissions have been performed at the Guitar Foundation of America International Festival and Competition (Buffalo), the Westmoreland Symphonic Winds, for Ion Sound Project and the theme music for Excela Health’s (Westmoreland County) television, radio and web commercials. Recently he toured in South America and the Eastern Caribbean with contralto, Daphne Alderson. John holds a Ph. D. in music composition and theory from the University of Pittsburgh, and is an Artist-Lecturer in guitar and composition at Carnegie Mellon University and Seton Hill University.

As a performer for over 40 years, Jim Ferla has given numerous solo and ensemble concerts throughout the United States including programs at the Smithsonian Institution, Arizona State University, Wolf Trap, the Chautauqua Institution, Florida State University, Oberlin College and Notre Dame. He has been heard on NPR, PBS, CBS, Voice of America, USIA, Chukyo TV-Nagayo in Japan, and, in Pittsburgh, on WQED-FM. Mr. Ferla has published several articles on guitar repertoire in SoundBoard, the journal of the Guitar Foundation of America, and is heard on seven CDs. He performs most frequently in a guitar duo with colleague John Marcinizyn with a repertoire ranging from Renaissance to Jazz. In addition to concerts with the Ferla-Marcinizyn Guitar Duo he has also performed with the Pittsburgh Symphony, Cuarteto Latinoamericano, singer/actress Kate Young, the Renaissance City Winds, the Dear Friends Ensemble, oboist Cynthia Koledo DeAlmeida, tenor Doug Ahlstedt and contralto Daphne Alderson. Jim Ferla teaches guitar at The University of Pittsburgh and at Carnegie Mellon University.