Floating somewhere between fantasy and reality, between the mind and the body, is Güera, the latest poetry collection from Rebecca Gaydos. Published in 2016, the book is divided into five distinct parts, including prologue and epilogue. What struck me initially was the sparseness of each page, made up of stanzas that read as prose instead of verse. However, as I began to read, the weight of each word became immediately apparent.

Gaydos begins with a piece called “Arctic Dream,” in which a woman struggles with autonomy. Her marriage, her mother and her money all seem to be pulling her in different directions, and she wrenches against their grip throughout this poem. It is here where we first encounter the concept of “tourism,” which appears and reappears in a variety of contexts in Güera.

“Güera,” a Spanish slang term referring to a light-haired girl, shows up many times in this collection, and serves as the title for two cycles of poems. Gaydos herself is from Santa Barbara, California, and her existence on the edge of a multicultural world becomes apparent through not only her language and references, but also through interactions with a ranging cast of characters. “Mezcalita” is an example of her situational experience:

the curious structure of a stereotype
with my braids I looked

Gaydos and her book exist in a land of allusions. As one gathers from the notes immediately following the epilogue, every section of poems has been influenced by a verse, line or utterance from a historic figure. John Henry makes an appearance in an epigraph, and a reference to Jack Kerouac’s Tristessa (a book Gaydos admits she never actually read) peeks through the blinds of “Güera 2: The Federal District.” This series of poems explores colonialism through the poet’s adolescent experiences—from the cultural role-playing often found in grade school classrooms to romantic encounters that live on the border between fetish and fascination.

Between these literary nudges and her often sharp twists in setting and scene, Güera offers a journey much like the ones my childhood ViewMaster toy did. In it, brightly-colored, sometimes hazy images are presented and examined, then swiftly replaced by new ones. After all, this is how the body exists in the world, tumbling from interaction to interaction, stretched by expectation. As she says in her penultimate poem: “Sometimes a woman on the street shakes her head at me. / Before I open my mouth, you already know something.” 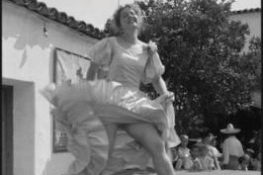 Mix it up with Rebecca Gaydos’ new poetry collection