I will be the first to admit that I usually steer clear of the true crime genre. Reading about the worst event in someone else’s life is not entertainment, it’s tragedy – and worse, it’s tragedy marketed for public consumption. Still, in the case of I’ll Be Gone In the Dark, my interest was so overwhelming I decided to give it a try. This is due in part to the excitement surrounding the arrest of Joseph James DeAngelo (the Golden State Killer) and this book’s impact his capture. That and the uniformly positive reviews from news outlets and critics only served to enhance my curiosity for the late Michelle McNamara’s “instant classic” of the genre.

This is the only story Michelle McNamara ever wanted to tell. In 2007 she learned about the man she called The Golden State Killer, a psychopath who was responsible for more than fifty sexual assaults and ten murders. He terrorized parts of California from the 1970s through the 1980s and occupied a significant portion of McNamara’s life. This book is the tale of a woman who became obsessed with finding the identity of a man who had eluded multiple police departments and jurisdictions, cold case detectives, sketch artists, amateur sleuths, and an entire online community (EAR-ONS, or East Area Rapist-Original Night Stalker) devoted to cracking a case that was by then decades old. 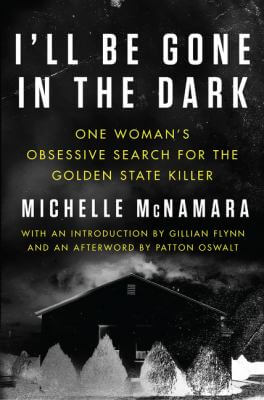 McNamara became fascinated with what she dubbed “violent men unknown” as a teenager when a young girl was murdered in her neighborhood. In time, these men came to engage a significant portion of her adult life as well, a situation that only worsened with the unsolved case of the Golden State Killer. The effect that those thousands of hours of research had on her was palpable as she wrote, “there’s a scream permanently lodged in my throat.” (p. 173) Her account of her obsession is at times heartbreaking to read, as normal life events fall by the wayside. She reminisced that one anniversary passed by almost without her notice—she had been too engrossed in her research to pay it much mind.

She enjoyed connecting with others who had a passion for detective work and found kinship in the online community dedicated to finding this man. With the help of “the kid” and some detectives present on the original cases, she was able to gather and string together several thousand files, geographic profiling maps, witness accounts, photographs, and evidence to further expound upon theories as to the killer’s possible identity and location.

Michelle McNamara does what most true crime stories seem to neglect. Her narrative gives voice to the victims and humanizes them by interspersing the crimes with their personalities and daily lives. In a particularly good example, she details “a mother and her teen daughter arguing over freedom and responsibility and swimsuits for what they didn’t realize would be the last time.” (p. 15) The descriptions of the violence done to them can be a bit jarring at points, but her compassion for the victims and explanation of how violent crime reverberates through others’ lives is marvelous in its insight: “If you commit murder and then vanish, what you leave behind isn’t just pain but absence, a supreme blankness that triumphs over everything else. The unidentified murderer is always twisting a doorknob behind a door that never opens.” (p. 102)

The final chapter in this meticulously researched but at times difficult to read book ends on a hopeful note. In “Letter to an Old Man” she imagines bringing him to light and holding him accountable for his actions – and as everyone now knows, Michelle McNamara got her wish. After more than forty years, his ski mask is off and the handcuffs are finally around his wrists.

Borrow a copy of "I'll Be Gone In the Dark."