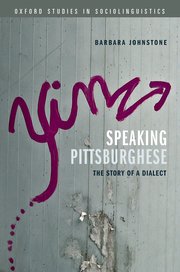 LBPH is proud to a share a new locally produced title available for loan or download from BARD. Speaking Pittsburghese: The Story of a Dialect was narrated by volunteer Thelma Snyder, and edited and produced by the LBPH Studio Team, comprising of volunteers Diane Barati and Joe Farinacci.

Speaking Pittsburghese: The Story of a Dialect
Barbara Johnstone
DBC 1847
Studies the unique language of the Pittsburgh, Pennsylvania region as spoken by its residents known locally and abroad as yinzers.  This academic study covers the origins, history and etymology of a language that is unlike any other in the world.  Includes conversational transcripts with residents of the region and the author.  2013.

Please visit the LBPH Soundcloud page to listen to a sample of the title!