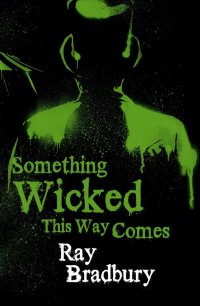 If you’ve heard of Ray Bradbury before, you’ve heard of Fahrenheit 451 (DB 34963).  A slightly deeper cut would be the famous Martian Chronicles(DB 26787).  A deeper cut, and some of my personal favorite things he has written is his horror.  A podcast I really enjoy has been going through some of them for October, calling them October Country as there is King Country or Lovecraft Country.  I thought I’d join in and show off some of the Bradbury we have in general and specifically his horror.

The first one I ever read by him was Something Wicked this Way Comes (DB 09245/DB 50233).  Its a strange story involving a carnival coming to town and demonstrating its power.  That is not a great summary.  But with most horror, talking about it too much just pulls its teeth.  Our catalog says:

Two thirteen-year-old boys are fascinated by the carnival that comes to their small town. A series of frightening events makes them      realize that there is something sinister about the carnival and its owner.

Bradbury also wrote for kids with The Halloween Tree (DB 44005), being my pick for this blog post.  It is not only a great story, but a dive into Halloween and the role such holidays take in society.  I just made it sound preachy but it isn’t.  Our catalog says:

On Halloween night, eight boys arrange to meet their friend, Pipkin, at the haunted house outside of town. Before the others reach him, though, Pipkin is grabbed by a dark Something. For grades 4-7.

All of this is to introduce you to a great horror writer who you did not know was lurking inside a famous sci fi and dystopian writer.  Much has been made of his work, and he deserves it.