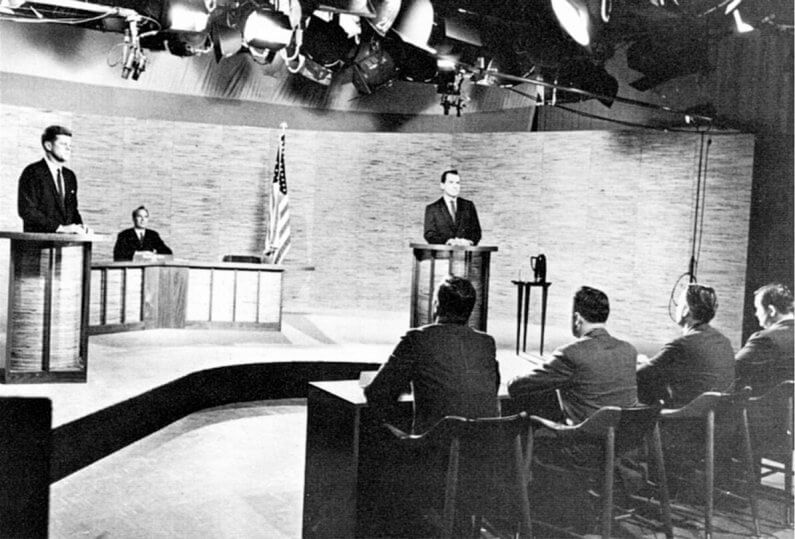 Tonight marks the beginning of the first presidential debate leading up to the 2020 Election between current president and Republican candidate, Donald Trump, and Democratic nominee, Joe Biden. This event will be livestreamed on various news media channels as well as this YouTube playlist.

Cable-Satellite Public Affairs Network (C-SPAN) is an American cable and satellite television network that was created in 1979 by the cable television industry as a nonprofit public service. It televises many proceedings of the United States federal government, as well as other public affairs programming.

Trump and Biden meet tonight in Cleveland for their first of three debates — a socially distanced affair in which the candidates won’t shake hands. Fox News host Chris Wallace is the moderator. The audience, [at just over 100 people], will be limited compared with previous debates, and everyone attending the event at Case Western Reserve University will undergo testing for Covid-19 and follow other health safety protocols. The debate is set for 9 p.m. Eastern time, and will last 90 minutes without any commercial breaks. The topics for the debate are “The Trump and Biden Records,” “The Supreme Court,” “Covid-19,” “The Economy,” “Race and Violence in our Cities” and “The Integrity of the Election,” according to The Commission on Presidential Debates.

The presidential debates are a long-standing event meant to help voters make informed decisions about upcoming elections. But did you know that the framework for these debates was set in the mid 1800s? Let’s take a look at the history of political debate in our country, and learn about the structure of the 2020 presidential debate.

History of the U.S. Presidential Debates

The tradition of election debates in the United States can be traced back to the Illinois senate race of 1856, when Abraham Lincoln and Stephen A. Douglas presented speeches in seven Illinois congressional districts on the topic of slavery in the United States (The Commission on Presidential Debates, 2020). The Lincoln-Douglas Debates set the precedent for candidates to present their cases to the people and engage with their opponent in constructive, public dialog (Bill of Rights Institute, 2020).

Until the end of the 19th century, presidential candidates left most of the campaigning to their supporters, but it became more popular after the Lincoln-Douglas debates. At first, people who could not travel to an in-person debate had to settle for reading printed accounts of the event, but the advent of the radio allowed people from across the country to listen to the candidates in real time (Bill of Rights Institute, 2020).

According to the U. S. Senate, the first nationally televised presidential debate actually took place between former First Lady Eleanor Roosevelt (D) and Maine senior senator Margaret Chase Smith (R) on behalf of Adlai Stevenson and Dwight Eisenhower respectively (United States Senate). Then, in 1960, the famous debates between John F Kennedy (D) and Richard Nixon (R) aired on ABC, CBS, and NBC. It was the first time Presidential candidates appeared on national television. (The Commission on Presidential Debates). Since 1972, every Presidential race has included televised debates, which have been crucial to helping voters make their decision. (PBS Newshour, 2015).

Structure of the 2020 Presidential Debates

The Lincoln-Douglas Debates lasted three hours each, with the first candidate speaking for one hour, the second candidate for one and a half hours, and the first candidate replying for half an hour. However, our modern presidential debates are structured a little differently.

All three 2020 presidential debates are scheduled to take 90 minutes each. The first debate will have six 15-minute segments dedicated to the topics chosen by moderator Chris Wallace. There will be no opening statements, and the first question will go to President Trump. The second debate will be a town hall format, where the candidates will answer questions from the public, and the third debate will be structured like the first, with six 15-minute segments (Washington Post, 2020).

There will also be one Vice-presidential debate between current Vice President Mike Pence (R) and Senator Kamala Harris (D) on October 7th. This debate will consist of nine 10-minute segments, and will be moderated by Susan Page of USA Today.

It’s important to learn the significance and history of presidential debates when preparing to tune in or listen to a present-day event. Here are some additional strategies to keep in mind when absorbing the information shared in the presidential debates (according to the National Museum of American History):

For more facts about presidential and vice presidential debates, read this Pew Research Center article. You can also learn more through our databases (U.S. History in Context) or check out the related book lists and programs below.

'Hear Me Out' Dialogue Series: Does My Vote Count?

Hail to the Chief!

Life as a First Lady