Now called Veterans’ Day, on November 11th, the United States observes what was originally called Armistice Day, to reflect upon, and show appreciation for, those whom have served, and are serving, in our armed forces. The ‘Armistice’ in Armistice Day refers to the formal declaration of the cessation of fighting which ended World War I, at 11:00 am, on November 11th, 1918. The centennial observances of the war have been going on since 2014 for other countries, but the centennial of the United States entering the war is coming up in 2017. This book is the perfect companion to that upcoming observance.

Journalist Richard Rubin did history an enormous favor between 2003 and 2008. He located and interviewed the remaining living U.S. veterans of World War I, then between the ages of 101 and 113. Initially concerned about the logistics in interviewing someone over 100 years old given the vicissitudes of extreme old age (and how accurate the memories would be in the first place), he is stunned when one veteran can recall almost every detail about his service, including the train name and number he took to the induction center – 87 years prior. Just as stunning is the paycheck produced by one veteran for his service, which lasted all of two hours (you have to read to find out why!). He never cashed it, he kept it to prove he had served if anyone ever questioned him. Alternating chapters detail the social, political and cultural atmosphere of the country during the war. Did you know that after the U.S. officially entered the war in 1917, people were put in prison for publicly making statements against the war effort? It was, legally, considered treason. Appropriately, Rubin concludes the book with the life and career of veteran Frank W. Buckles, whom died in February 2011, just having turned 110 – the last of the doughboys. 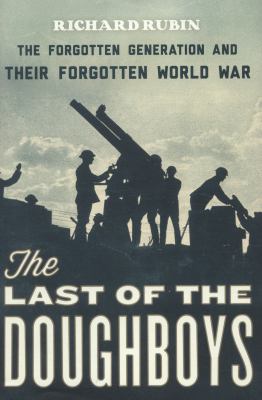 The Last of the Doughboys: The Forgotten Generation and Their Forgotten World War

Between 2003 and 2008, journalist Richard Rubin located and interviewed the remaining few dozen United States veterans of World War I – all of them, then, between 101 and 113 years old. Chapters resulting from those interviews are alternated with ones highlighting the cultural, social and political atmosphere of the country leading up to, and during, the war providing the context for the memories of these oldest of Americans. From the last man alive to serve as an army lumberjack, to the enlistee whom was officially a soldier for only one morning – and still had the paycheck to prove it – this is a story of ordinary men and women whom lived through the event that created the 20th century, the ramifications of which are still being felt today in the 21st.