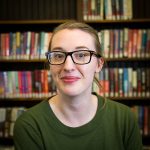 Like many of his other books, Jason Reynolds’s portrayal of Miles focuses on how Miles struggles to understand himself, particularly in the face of his family’s past, and to stand up for himself and his community. Although the butt-kicking action of the superhero story isn’t emphasized, Reynolds’s nuanced development of Miles and grounding of the central mystery plot in socio-political concerns that are particularly timely for 2017 readers, gives us a hero to look up to and strive for.

In addition to being just your average teenager, Miles Morales is also Spider Man. But lately, Miles’s spidey-sense has been on the fritz, especially in his history class, where his teacher lectures on the historical “benefits” of slavery and the importance of the modern-day prison system. When a misunderstanding leads to his suspension from school, Miles begins to question his abilities and wonders if a kid like him is even meant to be a superhero. But then he uncovers a chilling plot, one that puts his friends, his neighborhood, and himself at risk. Looks like Miles will have to suit up!