John Carreyrou’s Bad Blood: Secrets and Lies in a Silicon Valley Startup tells the story of the biotech firm Theranos amazing rise and dramatic fall. Theranos was a biotech firm started by Elizabeth Holmes that had set out to revolutionize the future of blood testing. Holmes had claimed that individuals would be able to have their blood tested with just a prick to the finger and receive fast, accurate results.  Theranos would receive high praise and plenty of media attention, but for all its claims the company would not be able to deliver resulting in its eventual downfall.

I had briefly heard about the controversy surrounding Theranos but prior to reading Bad Blood was not sure what actually happened with the company. Carreyrou provides in-depth research about the individuals involved in the company’s creation and downfall. What makes the book so interesting is the fact that at one point Carreyou becomes part of the story. Carreyou, a reporter for the Wall Street Journal, starts investigating the firm. The author tells how he came upon the story and what happened when those at Theranos discovered his investigation. I could not put this book down. I was on the edge of my seat the entire time waiting to see what would happen next both with the firm and Carreyrou’s investigation. Carreyou’s narrative provides a page turning read that reads like a thriller novel only it’s true. 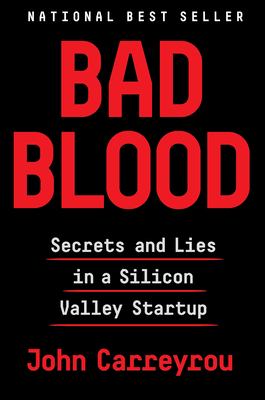 Bad Blood: Secrets and Lies in a Silicon Valley Startup

The full inside story of the breathtaking rise and shocking collapse of Theranos, the multibillion-dollar biotech startup, by the prize-winning journalist who first broke the story and pursued it to the end, despite pressure from its charismatic CEO and threats by her lawyers. In 2014, Theranos founder and CEO Elizabeth Holmes was widely seen as the female Steve Jobs: a brilliant Stanford dropout whose startup “unicorn” promised to revolutionize the medical industry with a machine that would make blood testing significantly faster and easier. Backed by investors such as Larry Ellison and Tim Draper, Theranos sold shares in a fundraising round that valued the company at more than $9 billion, putting Holmes’s worth at an estimated $4.7 billion. There was just one problem: The technology didn’t work. (Goodreads Description)