In Caddyshack: The Making of a Hollywood Cinderella Story, Entertainment Weekly film critic Chris Nashawaty gives a behind-the-scenes look at how one of the greatest comedies of all time, Caddyshack, came together.  At the core of the book lie its writers: former Harvard Lampoon writer and co-founder of National Lampoon magazine Doug Kenney; first time director, co-writer, and Second City alum Harold Ramis; and Saturday Night Live writer (and Bill Murray’s brother) Brian Doyle-Murray. As a follow up to their smash hit movie Animal House, Kenney and Ramis hoped to get more creative control with their next project, and got way more than they bargained for on Caddyshack.

The book does a great job of covering the wild, party-like atmosphere on the Florida set, the in-fighting between some of the stars, and the studio pressure from producer, and former Barbra Streisand hairdresser Jon Peters.

With Chevy Chase, Billy Murray and Rodney Dangerfield as the film’s stars, writer Nashawaty is offered a never ending supply of juicy and hilarious stories. Some include Chevy Chase and Bill Murray’s back stage fist fight on SNL, Murray stealing a car from Lorne Michaels and driving it to the set, as well as Rodney Dangerfield constantly asking co-stars to listen to recordings of his stand-up act.  Most fascinating is the fact that Murray improvised his entire role as groundskeeper Carl Spackler, including his iconic ‘Cinderella Story’ monologue.

This book is also a must read for anyone even remotely interested in how (or how not) to write, direct and produce a film, or the machinations of late 70s early 80s Hollywood. 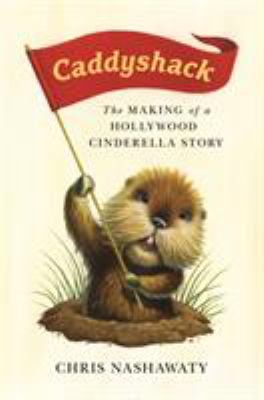 Caddyshack: The Making of a Hollywood Cinderella Story

In Chris Nashawaty’s Caddyshack: The Making of a Hollywood Cinderella Story, the Entertainment Weekly film critic chronicles the wild and crazy creation of Caddyshack, one of the most influential comedies of all time. Nashawaty follows the films creators, Doug Kenney and Harold Ramis, from their beginnings with the National Lampoon magazine and Second City, to being handed their very first Hollywood picture, and all the trouble and triumphs which go along with it.