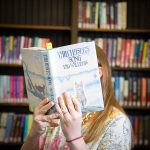 Are you waiting for the popular novel by Kevin Kwan? Did you just finish it and want something similar? Did you love the movie? Try one of these selections from the librarians from the First Floor, New and Featured Department at Main.

Happy Birthday or Whatever: Track Suits, Kim Chee, and Other Family Disasters

Hilarious and loving look at a Korean/Korean-American family through the eyes of a daughter.

Studying at Oxford University is already a dream come true for American Rebecca “Bex” Porter, but she may have entered full-on Cinderella territory when she meets her prince charming living just down the hall. It turns out that “Nick” really is Prince Nicholas, the heir to the throne of Great Britain, and while dating him means ritzy dinners and posh society, it also means loads of pressure and paparazzi.  Now Bex has to decide how much of her own life she’s willing to sacrifice for her happily ever after.

The clash of cultures: West vs East, haves vs have-nots, married vs single, traditional vs modern are all at the heart of this dazzling novel about a head-strong woman who knows what she wants and is willing to do what it takes to get it.

If you’re more interested in the darker underbelly of the lives of the unbelievably rich, follow Waugh’s 1930s Londoners as they dramatically and pretentiously party their lives away.

A romantic comedy film about a gay Taiwanese immigrant man who marries a mainland Chinese woman to placate his parents and get her a green card. His plan backfires when his parents arrive in the United States to plan his wedding banquet and he has to hide the truth of his partner.

When Life Gives You Lululemons

Three women team up to outwit the rich and famous in Greenwich, Connecticut.