Have you ever been holiday shopping in Manhattan and witnessed the delightful spectacle of tuba-playing Santas at Rockefeller Plaza? Ever attend a State College December Tubafest, or been amazed at the sight and sound of massed tuba choirs on YouTube?

Thanks to professor Harvey Phillips, the legendary tuba virtuoso and renowned instructor at Indiana University, TubaChristmases have become a holiday tradition across the country in over 200 locations across America for over 40 years.

In his memoir Mr. Tuba, Phillips passionately recalls the sources of his devotion to an instrument often considered more unwieldy than melodious. First, he ran away from his Missouri childhood home to join the circus. Well, no – his first professional gig was in the Ringling Brothers and Barnum & Bailey Circus Band, followed by training at the Juilliard School, freelancing with the New York City Opera and Ballet Orchestras, founding the New York Brass Quintet, serving as vice president of the New England Conservatory of Music and, his most illustrious gig of all, becoming Professor of Music at Indiana University.

His dedication to coaching tuba players of all ages was equal to his performance artistry, and he tirelessly worked to promote the tuba as a serious musical instrument by commissioning more than 200 new tuba works and conducting brass instrument performance clinics around the country. As a clinician, Phillips’s relaxed and congenial manner came as a revelation to many a serious brass player, too.

At a University of Michigan School of Music presentation during my undergraduate years, I was astonished by Harvey Phillips’s demonstration of advanced brass playing effects as he hummed through his tuba a descending scale while simultaneously playing an ascending scale using the conventional technique of “buzzing” his lips (a.k.a. embouchure) with complete nonchalance!

Mr. Tuba is a heartfelt reminiscence, engagingly written by a master performer and teacher. It includes numerous color photographs replete with dozens of Santa tubists, as well as the leading composers and performers of the Harvey Phillips era. 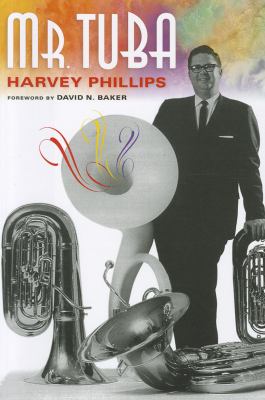 Harvey Phillips was a legendary tuba virtuoso and a beloved teacher at Indiana University. The legacy of his enthusiasm for the tuba lives on in his TubaChristmases and Octubafests, now in their 4th decade of existence. Mr. Tuba is a heartfelt reminiscence which includes numerous color photographs replete with dozens of Santa tubists, as well as the leading composers and performers of the Harvey Phillips era.