For the 17th consecutive year, 22 men convene for a weekend at an Interstate Highway hotel. The reason for their gathering? To assume the identities of and reenact a competition between the Washington Redskins and New York Giants of the National Football League. More precisely, they intend to mimic a singular and most unusual play as had occurred during an actual game that Washington hosted on November 18, 1985. That contest, and this solitary play, henceforth known publicly as “The Throwback Special”, were immediately immortalized by reason of the resultant macabre: a Monday Night Football audience was violently confronted with the catastrophic, career-ending injury sustained by Redskins Quarterback, Joe Theismann, at the hands of the eminently feared, universally esteemed Giants Linebacker, Lawrence Taylor.

When I say that the men in the novel are assembling so that they may assume the identities of the athletes who were on the field of play at the time of The Throwback Special, this is no exaggeration. The first official business of the yearly enclave is the Draft, during which, and by following strict, interdependent rules of order, the men select, or, when circumstances dictate, are assigned the individual they will portray in that years mounting of “the play”. To this end, the men arrive at the hotel not with attaches or rolling business cases, but with duffel bags filled with the equipment and uniform (down to the team insignia and playing numbers) of their historic counterparts.

This annual pilgrimage of (now) middle aged men intent on acting out the moments leading up to and including Theismann’s most ghastly suffering is, to be sure, an odd premise at least. Given however that our privilege of witness occurs for the 17th such iteration, it is an instantaneous and sympathetic estrangement I believe you will feel for and with the “specialists”. As one character, Robert, muses when another curious hotel guest inquires after his participation:

“There was not a good way to talk about what he was doing here.”

The exact opposite is true of Chris Bachelder who doesn’t do a good job, but a great job in illuminating the certain insecurities that plague the 22 men of The Throwback Special; a group composed of individuals who are adept at finding paradoxical exultations and degradations in every tradition. What they say to each other, keep to themselves or write on restroom stall partitions is breathtaking, heartbreaking and hilarious, all the more so when superimposed by generous offerings of 3rd person omniscient narration.

The original Throwback Special was a trick play designed to subvert expectations. Bachelder has succeeded where his book’s namesake failed by composing a highly literary examination of the mundanity that pervades even the most extravagant rituals and housing it within the conceit of this very funny novel that lets on to knowing a little bit about a lot of things in the games of life and football. 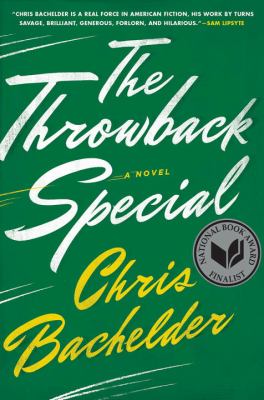