The December 6th 1969 tragedy at Altamont Motor Speedway is something I’ve been interested in for a while but honestly, I’ve only had the vaguest notions about the fracas that actually went down. Something about a shambolic hastily planned Stones gig, conflict with the Hells Angels’ “security”, some folks not making it out alive and the gasping death throes of the hippy-dippy “summer of love”.

Author Saul Austerlitz deftly fills in all of those unclear and indefinite impressions of mine with a finely detailed series of ever more frustrating events. Austerlitz manages a clever pastiche of post war sociology, true crime, teenage tragedy, concert promotion, racism, counter culture and documentary filmmaking, all seemingly disparate elements, all tied together by the haunting life and death of Meredith Hunter.

“The story of the Altamont festival would become forever intertwined with that of Meredith Hunter, the eighteen-year-old who attended the concert and never came home. Hunter’s fate would come to stand in for a nearly endless array of dashed hopes, foiled dreams and crushed expectations.” -Saul Austerlitz- 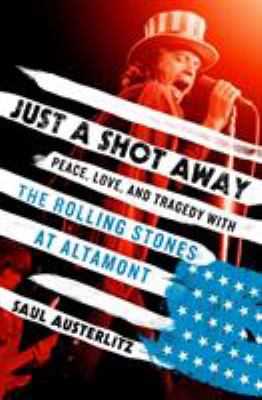 Just a Shot Away: Peace, Love, and Tragedy with the Rolling Stones at Altamont

In Just a Shot Away, writer and critic Saul Austerlitz tells the story of “Woodstock West,” where the Rolling Stones hoped to end their 1969 American tour triumphantly with the help of the Grateful Dead, the Jefferson Airplane, and 300,000 fans. Instead the concert featured a harrowing series of disasters, starting with the concert’s haphazard planning. The bad acid kicked in early. The Hells Angels, hired to handle security, began to prey on the concertgoers. And not long after the Rolling Stones went on, an 18-year-old African-American named Meredith Hunter was stabbed by the Angels in front of the stage. The show, and the Woodstock high, were over. (Goodreads Description)