As a young person I became accustomed to hearing older generations decry the decline of civilization as evidenced by the debauchery of my age group, generally ascribed to our embrace of sex, drugs, and rock and roll.

Having survived several generations since then, I have seen all of them characterized as the nadir of human society, with drug abuse given as one of the major causes.

It was quite enlightening, therefore, to read Thomas De Quincey’s 1821 account of his relationship with laudanum, a tincture of opium in alcohol.  Despite his self-description as an “opium eater”, De Quincey actually drank the tincture in various concentrations of what was essentially morphine, initially in the hope of relieving a severe headache, then for its hallucinatory properties, eventually acquiring a long-term addiction.  De Quincey presents an unvarnished account of the effects of the drug, including vivid descriptions of dreams and visions, the horror of which eventually led him to renounce his addiction.

Of course, opium use predates De Quincey’s account by centuries, but in the form of laudanum it reached the status of “patent medicine” during the 19th century.  The name was given to the tincture by Paracelsus in the 16th century, and is derived from the Latin verb laudare (“to praise”), an indication of the hopes placed on the substance as an escape from physical pain and as an aid to visionary creativity. 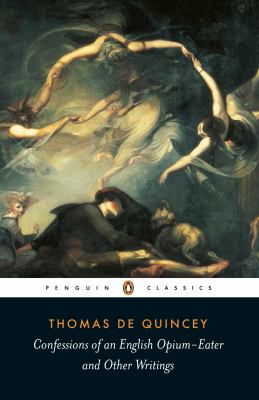 Confessions of an English Opium-Eater and Other Writings

The author, who was a friend of William Wordsworth and Samuel Taylor Coleridge, discusses his life, including estrangements from his family, the ailments that led to his eventual daily use of opium, and the addiction that followed.