In this military science fiction adventure, Commander Honor Harrington has just graduated from the Royal Manticoran Navy’s Advanced Tactical Course. Her future should be promising, but she embarrassed her superior, and in retaliation he’s banished her to the edge of the kingdom with an outdated light cruiser and a crew that blames her for their troubles.

Honor doesn’t play by the rules set down by the Navy’s high command (mostly composed of men), and she doesn’t take kindly to being looked down on because of her reproductive organs. Instead of becoming more “manly,” Honor proves that she can hold her own in space combat (with an outdated, malfunctioning ship, no less) and in the sparring ring–not to mention the intelligence arena.

I judge all other “strong” female characters against Honor’s measuring stick, and few live up to her courage, bravery, and self-determination (yes, I know she’s not real). Honor was one of my first role models, and she continues to be a character I look to when I’m having a rough day.

“Oh, your car won’t start? No big deal! Honor Harrington had to fend off an invasion with a ship that hardly even worked! In space!”

Adventure and pulse-pounding action aren’t the only things On Basilisk Station offers, though. Like any good novel, we get to see the characters mature and grow (or get left in the dust, as the case may be). Weber’s world-building is incredibly detailed, well thought-out, and politically rich.

If you’re looking for a read that hits “fun” and “serious” at the same time, look no further than this space opera series. 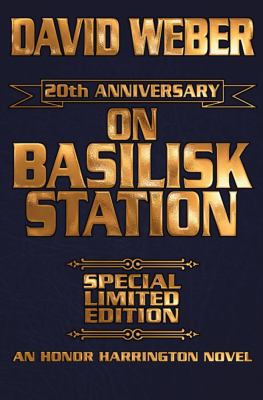 Honor Harrington is a new commanding officer in the Royal Manticoran Navy, but her first assignment isn’t going as planned. After embarrassing her high society superiors, Honor is banished to a backwater world. Now she has to fend off a secret invasion by the neighboring Republic of Haven with nothing but an outdated, dysfunctional light cruiser.