Recommendation: America’s National Education Association has announced that National Education Week in 2016 will be observed November 14-18, with the 18th receiving individual designation as Substitute Educators Day. The uncanny intersection of this day of recognition with my deadline for this month’s Staff Pick submission was all the coincidence I required to settle upon “Substitute: Going to School with a Thousand Kids”, Nicholson Baker’s 16th book and 6th work of nonfiction, as the title I’d put forth for your consideration.

In hopes that it would prove “the best, most direct way to learn how classrooms work”, Baker submitted for and achieved the qualifications necessary to be added to the rotation of substitute teachers eligible for placement at the elementary, middle, and high school levels in his Maine public school district – Regional School Unit 66 – and served all three on 28 separate occasions during the winter and spring of 2014.

Seeing as Baker has previously written entire novels that take place during the course of a single workday lunch hour (The Mezzanine) or in the minutes of an afternoon that a father spends bottle-feeding his infant (Room Temperature), my first thought was that Baker’s catalog of even one day in a classroom setting as an on-call substitute teacher would be rich enough to stand alongside, for instance, the aforementioned fictions, beloved for having eschewed the traditional trappings of plot in favor of their narrators’ interior monologues.

Then I cracked open a copy of “Substitute”, but instead of finding in the voice my expectations met with the familiar stream-of-consciousness, it was rather a play-it-straight, play-by-play accounting of events that I encountered. Each day he spends as a teacher is treated as a chapter to itself, beginning with the predawn telephone call that dispatches him to the classroom in need and concluding with an unadorned declaration of day’s end that in terms of brevity and finality most nearly echo those from the biblical account of the days of Creation.

Readers who are principally or exclusively familiar with Baker through his fiction may initially register some dismay at this dry framework. I’d encourage them to persist. Within the book that has been described as Baker’s most immersive foray into participatory journalism is so much of the warmth, wit and empathy that has characterized, really, all of his work. 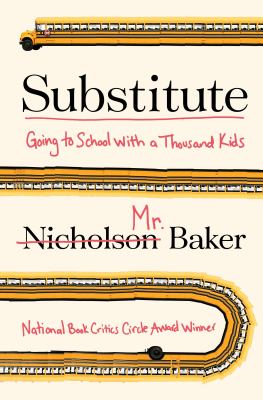 Substitute: Going to School with a Thousand Kids