I first stumbled upon Ranbir Singh Sidhu’s short story collection Good Indian Girls on the First Floor at the Main Library. I am a short story junky, and I needed my next fix. The title, and the cover, featuring three sets of penetrating eyes, grabbed me. So I took it home. 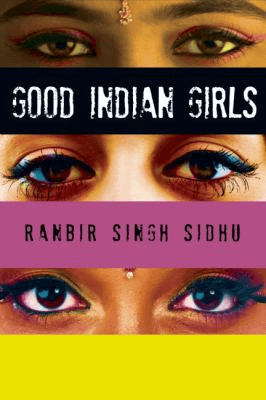 After reading the first story, (which reminded me of the best aspects of Flannery O’Connor’s classic “A Good Man Is Hard to Find”), I knew I was dealing with an author who knows how to put a sentence together for maximum impact. Sidhu’s prose is never like punch in the gut or a kick in the teeth–it’s more like a scalpel carving out your heart.

I loved the collection so much, and admired his writing so much, that I filled out the contact form on his website and asked if he wouldn’t mind answering a few questions. I just had to know how he managed to write those killer sentences.*

And so, it was with great pleasure that I had the chance to read an advanced copy of his novel before its publication date in mid-March.

Deep Singh Blue tells the story of an immigrant Punjabi family living in rural California in the 1980s. The action centers around the teenage Deep Singh, who has already begun taking college courses and finds himself in an affair with a married woman in her twenties.

His life at home is not without complications, either. His brother, who has been showing ever-more disturbing behavior, has just told Deep to die after not speaking for over a year. His father moves the family every time they begin to get settled and make friends. His mother refuses to acknowledge her older son’s oddities and is always playing matchmaker for both boys, in hopes a marriage will solve their problems. 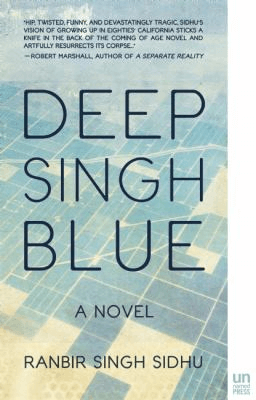 With a starting point that off balance, things only get worse for Deep. The reader is compelled to read on as each pillar of the teen’s life slowly crumbles and turns to dust. The catastrophes that befall Deep aren’t huge at first, but build to a wrenching crescendo at the end.

And all the while, Sidhu’s sentences are there, the scalpel cutting out your organs.

This is a novel about the immigrant experience, but it’s completely without nostalgia or sentimentality. It’s a beautiful portrait of displacement and the things we find in displacement’s wake, and I can’t recommend it enough.

*Here’s his answer, by the way: “At university, I studied with the avant-garde French novelist Monique Wittig, who placed enormous significance on working at the sentence level. She taught me a great deal, though usually very quietly. She would look at a whole page, then very softly bring the point of her finger down on a single word, and say, that in her opinion, this one word needed to be “suppressed.” She would, invariably, pick the one word that would have ramifications throughout the text, and it would be a lesson I could apply to the rest of my work. Those tiny “suppressions” of hers were incredibly important for me—they were like small bombs that went off in my mind, which sent shudders throughout all my work—and they helped teach me how to write powerful and taut sentences.”