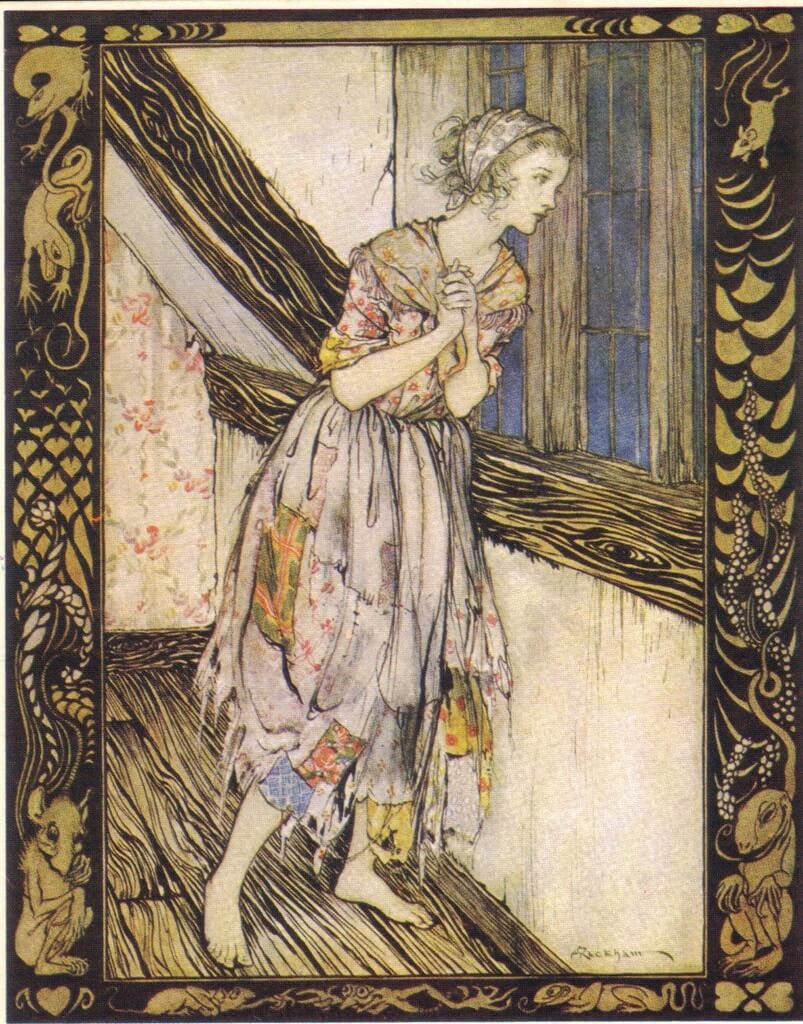 We all, I assume, know Disney’s iconic version of the fairy tale Cinderella. Friend to small animals, sings while scrubbing floors, love at first sight with Prince Charming, dainty feet, happily ever after. You may also know the Brothers Grimm darker, more vengeful justice-focused version, featuring violence and bodily dismemberment.

But these were not the versions that captured and shaped me. I read two powerful (yet very different from each other) tween retellings written in the late 90’s that focused less on the fantastical romance and more on “Ella’s” character development and struggle with the injustices of peasantry, poverty and the universal challenges of being a teenager.

Ella Enchanted DB 46186 by Gail Carson Levine has the delectable magical qualities of the classic tales, with fairy godmothers and a bothersome curse, but it’s balanced with the very realistic struggle between Ella and her step-family, grieving the loss of a loved one, and the pressures of growing into womanhood. The romance is even more swoony than love-at-first-sight (in my bookish opinion) as it involves a long stretch of the book with the young lovers as comradely pen pals. Ella’s intelligence and wit are what ultimately save the day and win the prince’s respect and love: an empowering message for young romantics as I was.

Just Ella DB 50346 by Margaret Haddox is a different beast. This story follows the idyllic characters after the typical declaration of “happily ever after” into Ella’s first weeks at the palace, and her unexpectedly hard transition from servant to courtier. She has questions. She befriends the maids. She wants to tend her own fire. The push back she receives from her palace etiquette educators becomes more than just annoying, and she begins to realize that what she imagined as a life of freedom might be just as restricted, if not more, than her old limitations as a peasant. The story is dark, but the material is light, with Ella and the prince using language like “totally” and “no way” in a mash-up of old and new. This Ella, although her path and story are different, exhibits a similar strength of will and independence that gave me a contrary view to the downtrodden, meek, helpless-without-her-mice-friends version glamorized by Disney.

I write about these because I recently stayed at an Air-bnb with a bookshelf of discards from younger years on the shelf (read: jackpot) where I found Just Ella, and I personally keep Ella Enchanted on my shelf at home (which I frequently revisit on a rainy day or sick day). Finding this relic caused me to neglect vacation plans and spend an afternoon lounging on the couch reading reflect on the impact these alternative stories had on my tween development. Both authors co-opted a fairy tale to tell important truths of how brave young women fight for themselves in an unjust world. They both ultimately tell love stories, but love stories that value character over looks. I can’t say that they saved me entirely from a Prince Charming/Love at First Sight Complex, but I can say that they added an alternative possibility, with creativity and style.