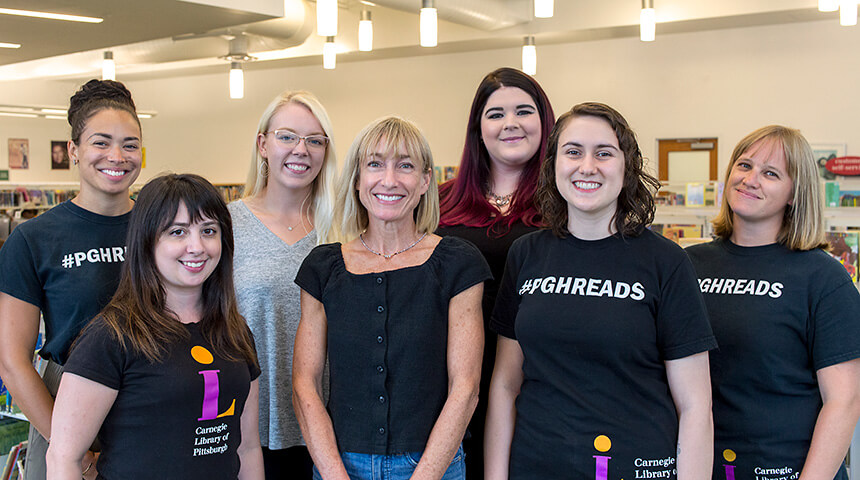 Kelly has a bachelor’s degree in English Writing with a concentration in Nonfiction, a certificate in Children’s Literature and a Master of the Arts in Teaching in Elementary Education from the University of Pittsburgh. She has been on the School Age BLAST team since November 2014. As a member of BLAST, she enjoys the creative freedom to collaborate and develop fascinating programs with her team members. In her spare time, she enjoys amateur drumming, exploring the various neighborhoods of Pittsburgh and snuggling with her kitties, La Lune and Spot.

Sarah received her bachelor’s degree in both Elementary Education and Music Performance (with a focus on opera) from Westminster College.  Prior to working for Carnegie Library of Pittsburgh, Sarah was a private music instructor in New Jersey for five years, specializing in voice, piano, flute, recorder and Kindermusik.  In 2014, she moved to Pittsburgh and fell in love with the city.  She joined the BLAST team in 2016 and feels so lucky to get to work with such amazing kids throughout the city of Pittsburgh.  In her free time, Sarah enjoys hanging out with her friends and family, reading (mostly children’s books) and rocking out on her piano.

Zia joined the School Age BLAST team in early 2017 after working as an afterschool coordinator in two Pittsburgh Public Elementary Schools. She has a bachelor’s degree in Cultural Studies and is committed to advancing equity and social justice, especially for Pittsburgh area children and their families. Zia is an avid reader and absolutely loves inspiring others to read. If you’d like to talk about your latest favorite book, an interesting article you’ve recently come across or ask for recommendations, she’s your girl!

Laura is a certified art teacher who has over a decade of experience working with the children of Pittsburgh. She has cared for children in early childhood programs at the Waldorf School of Pittsburgh, been part of the education team at the Frick Environmental Center, led an after-school program for the Homeless Children’s Education Fund and worked for the Pittsburgh Public Schools. Laura is excited she regularly gets to apply her crochet and sewing skills to BLAST programming. Laura spends a lot of time dreaming about nature hikes and pitching baseballs to her 5-year-old son, Jacob, who moonlights as a member of Early Learning BLAST’s quality control team.

Adina holds a Bachelor’s degree in English Literature, and recently completed her Master’s degree in Library Sciences at the University of Pittsburgh. Adina has over six years of experience working in public libraries, and brings her passion for library services and engaging young learners to the Early Learning BLAST team. In her spare time, Adina cooks, reads and co-hosts a podcast on book to movie adaptations.

Rachel joined the Early Learning BLAST team shortly after receiving her Master’s degree in Early Childhood Education from Duquesne University. Rachel is excited to use both her Bachelor’s degree in Psychology and Master’s degree simultaneously while planning her outreach programs. Therefore, it is no surprise that her storytimes focus on teaching socio-emotional and early literacy skills. Rachel serves the Knoxville and Carrick neighborhoods of Pittsburgh; she admires the closeness of each community and how they care for one another. Not only does she like talking about feelings, Rachel enjoys walking around different Pittsburgh areas, playing videogames, and eating salty snacks.

Nora joined the Early Learning BLAST team in the summer of 2019. Her focus is Pittsburgh Ready, an initiative funded by PNC Grow Up Great to support early literacy by providing select childcare partners with enhanced resources and training. Prior, she was a middle school teacher in Los Angeles and Mt. Lebanon, and an educator for the Carnegie Museum of Natural History and Rivers of Steel Explorer. Nora loves the camaraderie found at the library, immersed in conversations about books, learning, art, and community. She enjoys running the trails in Frick Park, reading historical fiction, searching for estate sale treasures, and trying new recipes.

Want to know more about BLAST?