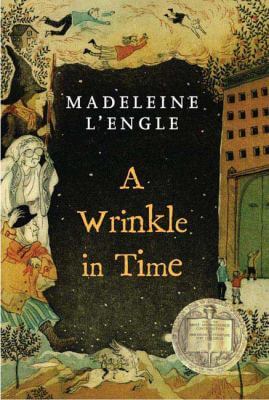 When I saw the trailer for the Wrinkle in Time movie, I was immediately hooked to the story.  A Wrinkle in Time was my first taste of Madeleine L’Engle’s writing and it was magical to say the least. She has a way of portraying her characters and their situations in such creative ways that it reads as if it were imagined on the spot for each reader. The first book introduces the readers to the Murry family. The parents are prize winning scientists who moved out of the city to get some peace and be closer as a family. The eldest, Meg, is an emotional child whose stubborn personality frequently gets her in trouble. The middle children, Dennys and Sandy are twins who love both literature and sports. The youngest and by far the strangest of the Murry family is Charles Wallace.  Not only more intelligent than most at the age of five, but his ability to sense the discomfort of his mother as well as his sister is almost clairvoyant in nature.

As the reader gets to know the family, we find out that the father has been missing for over a year. Charles Wallace is determined to find him, especially after we meet his new strange friends Mrs. Whatsit, Mrs. Who and Mrs. Which. The Ws take Charles Wallace, Meg, and their new friend Calvin (a neighbor from down the street) into another world to fight a dark entity that wants everything and everyone in the universe to be of one mind. Along the way they find the missing Mr. Murray, and see just how far the dark entity is willing to go for power. I really enjoyed each of the Ws, their physical descriptions alone added a lot to the novels imagination. They saw the world as a small but integral part of the universe, which I found oddly touching. The second book entitled A Wind in the Door follows Meg as she attempts to figure out why Charles Wallace is sick. Having a history of fighting darkness, she senses that what is making her youngest brother ill is from another world.  This idea is soon verified when The Teacher, a being from another realm, comes to help save the youngest Murry boy. The Teacher takes Meg, Calvin, and a few odd ball creatures to physically travel inside Charles Wallace to rid him of the demons attempting to kill him. The creatures L’Engle thinks up are straight out of a child’s imagination. From a dragon-like animal that has many eyes and can make itself invisible, to a mouse-like creature with an attitude bigger then itself. These creatures left me feeling nostalgic for the days I fought make-believe creatures in my backyard with sticks. The third novel entitled A Swiftly Tilting Planet starts ten years after the events of A Wind in the Door. We come upon the family about to chow down on Thanksgiving when Mr. Murry gets a phone call from the president. The world may not last past 24 hours as an evil ruler named Maddog Branzillo threatens to start a nuclear war. Charles Wallace is once again called upon by forces bigger them himself to save the world. But will he succeed as he has in the past? Charles Wallace travels to new pockets of time assisted by a magical unicorn in search of an answer to save the world. He is soon telepathically merging with different people throughout time to keep dark forces from changing history. Through his merging, he re-aligns the family that led to Maddog Branzillo’s evil path and prevents nuclear war from destroying the planet. The time jumps were an interesting way to show how close the paths of good and evil are, and it proved that Charles Wallace will always attempt the path of good.

I have loved the first three novels of this series and can’t wait to finish the last two. Madeleine L’Engle’s writes imagination in such a way that you feel a part of the story and remember how you were as a kid. Her books took me to a whole new universe and made me love each part of it. I may not fight monsters in my back yard anymore but I am happy to read such imaginative things.