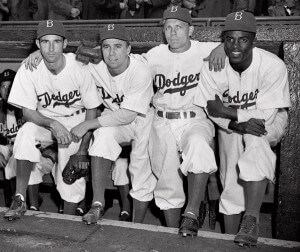 Doris Kearns Goodwin’s memoir Wait Till Next Year will transport you to another world — life in suburban America in the 1950s, a time in which baseball was unarguably our national pastime.  Ms. Goodwin has written that she initially set out to write the story of her coming of age as a passionate Brooklyn Dodgers fan but soon realized that her enthusiasm for baseball was entirely intertwined with all of her experiences growing up in Rockville Centre, Long Island.  And so this memoir includes her family, friends, neighbors, school and church, the shopkeepers in the tiny town center and the entire story of her life “as a young girl reaching adolescence in that deceptively tranquil decade of the nineteen fifties.”

Her devotion to the Dodgers was shared by her family and matched in intensity by her friends, some of whom were fans of the rival New York Yankees and Giants.  Fierce debates about which team had the best catcher, the strongest bullpen, the fastest base runner and the paramount home-run hitter were a source of both pleasure and frustration.

It was a time when kids roamed freely for long hours throughout summer, went on bicycle expeditions wherever they chose, and spent hours sitting cross-legged in front of the radio keeping a scorecard of every at-bat and out in endless baseball games.  Later, the miracle of television brought friends and neighbors together in each other’s homes to watch the games on 9 inch black-and-white screens.  In many ways it seemed a time free from worry, but as young Doris matured, she became aware of an unsettling backdrop of rampant polio, the atomic bomb, segregation and McCarthyism.  Nevertheless, this book will leave you with an appreciation of this very different era and one very spirited girl’s passion for baseball.