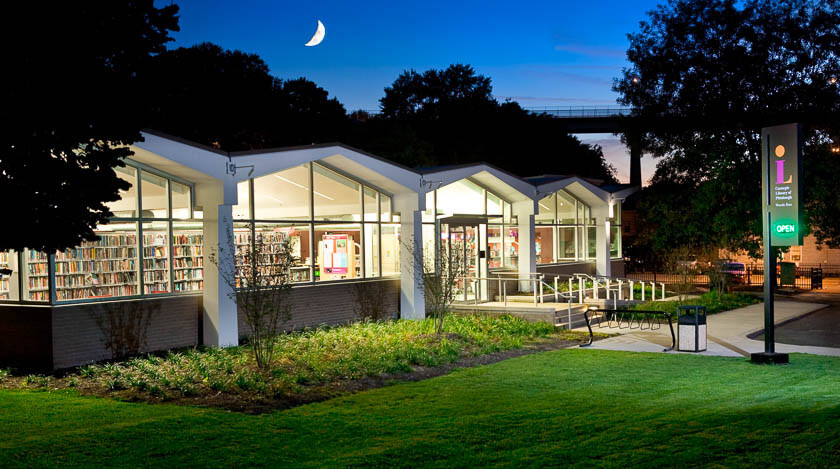 Now situated near the entrance to Riverview Park, CLP – Woods Run was originally located on Brighton Road. The Woods Run Library first opened in 1916 and was the only branch of the former Carnegie Free Library of Allegheny, notable as the first municipally owned and operated Carnegie Library. In 1956, the branch became part of the City of Pittsburgh’s system. On July 8, 1964, the branch opened at its current location on Woods Run Avenue.

More than 40 years later, CLP – Woods Run underwent renovations in 2006. Design plans replaced the Library’s brick walls with beautiful windows, creating a bright space that connects the building to the community. The building earned a LEED Silver certification in 2010 for features such as water efficiency, use of materials and innovation in design.

Despite being one of the smallest buildings in the Library system, CLP – Woods Run’s circulation is among the highest of all Carnegie Library of Pittsburgh locations. With its walkability, vibrant programs for kids, teens and adults, and popular collection of books, magazines, DVDs and music CDs, the Library is truly a gathering space for the local community.

Stop by and say “hi.” We cannot wait to meet you!

Situated near Riverview Park in the upper North Side, CLP – Woods Run offers vibrant programs for kids, teens and adults, and popular collections of books, magazines, DVDs and music CDs. The Library is truly a gathering space for the community.