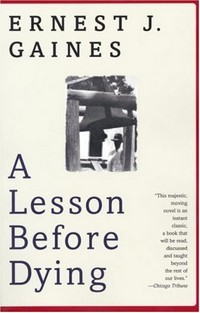 Recently, while sorting papers, I came across a list, made over ten years ago, of books I was interested in reading. On it was A Lesson Before Dying (DB36694), Ernest J Gaines’ 1993 novel which won the National Book Circle Award for Fiction. The book addresses issues of race and identity, and also law as an institution in the larger political, racial and social context. Although it is a work of fiction, it is said to be loosely based on the true story of Willie Francis, a young black man sentenced to death by electrocution in 1945 and again, by a gruesome turn of events, in 1947.

Set in the fictional community Bayonne, La. In the late 1940s, the story deals with two African American men struggling to attain dignity in a prejudiced society. Jefferson, a mentally challenged, barely literate young man, witnesses a shootout between two black robbers and a white liquor store owner, in which all except Jefferson are killed. Jefferson, accused of murder, is defended by a lawyer who, appealing to the all-white jury, denigrates his client as being incapable of executing a crime: “Gentlemen of the jury, this fool is not aware of right from wrong. Look at this—this boy. This skull here holds no plans. He’s [just] a thing to hold the handle of a plow…a thing to load your bales of cotton, a thing to dig your ditches…I would as soon put a hog in the electric chair as this.” Nevertheless Jefferson is sentenced to death by electrocution in a few short weeks.

Miss Emma, Jefferson’s godmother, entreats local African American teacher Grant Wiggins to visit Jefferson in jail, an allowance begrudgingly granted by the Sheriff, in an effort to instill in Jefferson a sense of self-respect so that he may meet his inevitable death “like a man.” At first spurned by Jefferson, and combating his own ambivalence about his community and the role he has been thrust into, Wiggins nevertheless perseveres as it becomes increasingly clear that the entire black community in Bayonne is deeply invested in the outcome of his efforts.