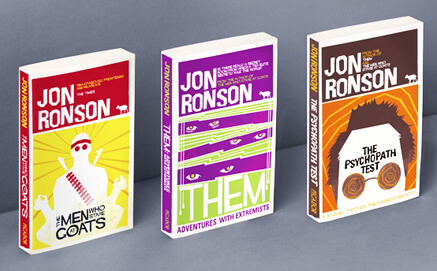 So I’ve recently read deeply into a rather strange author by the name of Jon Ronson.  He takes a journalistic and entertaining look at the subjects he chooses, from supernatural powers used by the US military to the idea of Psychopaths among us to the modern phenomenon of Social Media Shaming.

The first one I read has been sitting in my “to read” pile since I heard Ronson on a TED talk.  That is the Psychopath Test.  In this book, Jon looks at the idea of there being people with no morals, no controls and no cares running among society.  He looks at the implications of studies done on said people and the idea that the more successful ones end up running companies because of the same traits that others have who end up in psychiatric care.

The second book is So You’ve Been Publicly Shamed.  This books explores the reborn phenomenon of public shaming in the 21st century.  It takes a deep look at several cases, deserved or undeserved, and shows the mindset of everyone involved from the shamers, the shamees and people caught up in the issue.  It is one of the most interesting books to read currently as the phenomenon isn’t slowing down.

The last book I read is one you might of heard of before, because it was made into a movie.  It is called The Men Who Stare At Goats.    It goes into the world of remote viewers and physics that may, or may not, have been employed by the US government.  It is a strange read full of points that make you just stop and try to really absorb the fact that our government tried to employ people to kill goats by staring at them.  But as Jon points out this is the same government who admitted to MK ULTRA and giving unsuspecting people LSD.

Jon Ronson is a good author on strange topics.  These books are worth a read with a heavy grain of salt.  I have a hard time believing all of his stuff is genuine, or even that he believes some of the people he has interviewed, but it makes you think and presents interesting facts.  I would recommend So You’ve Been Publicly Shamed first as it is by far the best.  Psychopath Test comes next and Goats a distant last in the “interesting but weird” category.