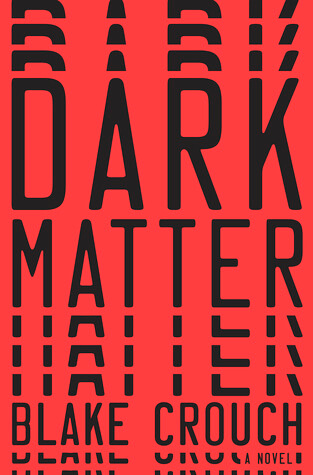 My Goodreads account has many shelves. There is a myriad of non-fiction titles, memoirs and novels that I have placed on endless lists for both myself and for the library bookclubs I’ve been a part of. One particular book that has been both on my personal shelf and the bookclub shelf is Dark Matter by Blake Crouch. I was thrilled when the Talking Books bookclub here at LBPH decided to read it for our upcoming meeting. Excited to start it, I took it with me on an evening of babysitting where I knew I would have a few hours to kill while waiting for the parents to come home.

Three hours after the kids went to bed, I found myself 150 pages in to the book and unable to stop. The story was riveting, I couldn’t wait to get to the next chapter. Blake Crouch has a way of writing that keeps you glued to the story. It also helps that half the time

are down the right side of the page

in a screenplay style

so I was burning through chapters at a faster rate than normal. I finished the book later that weekend in two more sittings, wondering how Crouch was going to end such a complex story. The story itself is about a man named Jason Dessen who wakes up after being kidnapped and drugged to a life that is both simultaneously his, and not his. Along with Jason, the reader has to figure out what happened, how it happened and whom to trust. Make no mistake, this is not an ordinary mystery book. It is a sci-fi, thriller, horror mystery book all in one. Once I found myself at the last sentence I felt relieved, almost coming out of a daze. Not because of what the ending consisted of but because the story needed to end. Dark Matter was my first novel experience with Blake Crouch but not my first interaction with his work.

For those of you who may not be familiar, Blake Crouch wrote The Pines novels which turned into the TV series Wayward Pines. I truly loved the creepiness of the TV series but didn’t get a chance to dive into the relating novels however, after the fast paced and nerve-wracking nature of Dark Matter, I think the Pines series will be finding their way on to my to-read shelf.

Anyone into creepy psychological thrillers with many twists and some solid uncomfortable moments will enjoy Dark Matter and its endless possibilities.