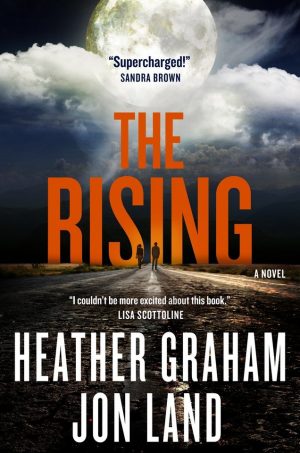 I’m not going to lie, Best of fans, I’m a little disheartened. You see, I’m of the belief that the Top Five is a bastion of what is hot and fresh. The up and comers, the new sizzling titles. And while that is mostly true, the list does provide that, with the occasional sentimental favorite being revisited landing in the list, this past month is a bit of familiar territory.

We don’t deal with repeat contenders very often in the Best of world, because there are so many great things to read, but this month features THREE (3!) holdovers from last month. And true to fashion, Patterson has kept his claws deep in, keeping both of his titles on the elusive list.

I considered omitting these and replacing them with the three closest to replace them, but that would not be fair to you, dear readers – fans of true champions, and a fair elected process – so I present to you the Best of BARD for April 2017:

The Rising
Heather Graham
DB 86859
After a football accident lands young Alex Chin in the hospital, his doctor and then his parents are murdered. Alex and his tutor, Samantha, flee. Racing to stay ahead of the killers, the pair work to figure out why Alex is being hunted before it’s too late. Unrated. Commercial audiobook. 2017.

Never Never
James Patterson
DB 86854 / CL 16458
Harry Blue is the top sex crimes investigator in her department, but even she didn’t see this coming–her own brother arrested for the grisly murders of three women. Harry’s now assigned to a new town with a new partner. But is he actually a watchdog Unrated. Commercial audiobook. 2017.

Chaos: A Scarpetta Novel
Patricia Cornwell
DB 86707 / CL 16389 / BR 21770
Cambridge, Massachusetts, medical examiner Kay Scarpetta and Detective Pete Marino realize that there are a number of odd details surrounding the death of a British female bicyclist. Her death soon appears to be tied to the person who has been cyberbullying Scarpetta. Some violence and some strong language. Bestseller. 2016.

Come and Get Us
James Patterson
DB 86850
Miranda Cooper’s life takes a terrifying turn when an SUV deliberately runs her and her husband off a desolate Arizona road. With her husband badly wounded, she must run for help alone as his cryptic parting words echo in her head: “Be careful who you trust.” Unrated. Commercial audiobook. 2016.