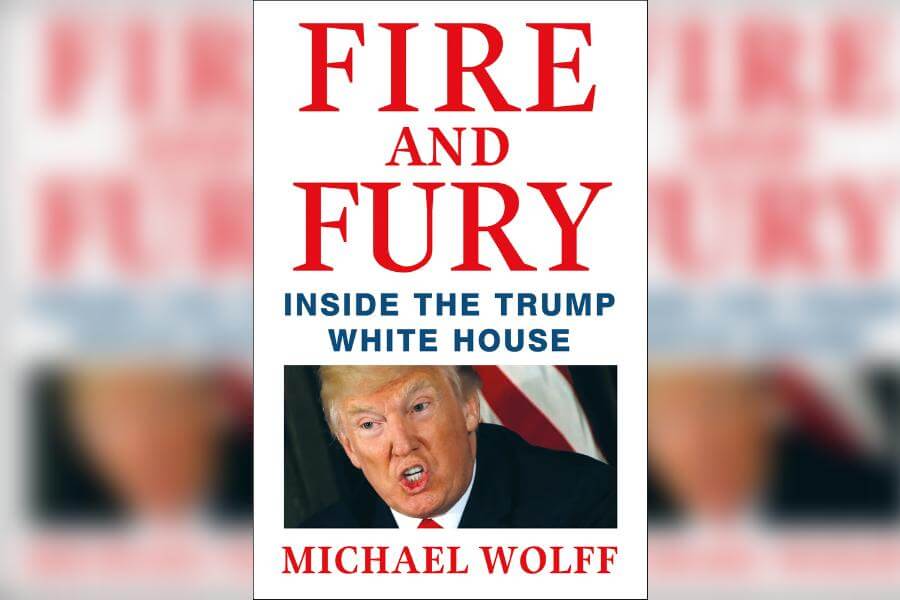 This year started with Fire and Fury! We received so many calls from our patrons who wanted to listen to this book, we had to hire 100 little gnomes who downloaded it day and night!

And THEN, the savvy LAPD cop encounters Hollywood glitz, a homicide blitz and almost nothing that is what it seems to be.

Which brings us back to the beginning…

Fire and Fury: Inside the Trump White House
By Michael Wolff
DB89802
Journalist examines the first nine months of President Trump’s administration. Discusses, among other things, the staff’s opinions of Trump, the reasons for FBI director James Comey’s firing, the story behind Trump’s claims of being wire-tapped by President Obama, and the state of White House strategies following Steve Bannon’s departure. Unrated. Commercial audiobook. 2018.

The Switch
By Joseph Finder
DB89663
Michael Tanner accidentally picks up the wrong MacBook in an airport security line. He doesn’t notice the mix-up until he arrives home in Boston, when he discovers that the owner is a US senator and that the laptop contains top secret files. Tanner soon finds himself a hunted man. Unrated. Commercial audiobook. 2017.

The Prostitutes’ Ball
By Stephen J Cannell
CL14476 / DB89232
LAPD detective Shane Scully and his newly promoted wife, Alexa, are driving home from a holiday party when they stumble across a shooting. A movie producer and two prostitutes were killed in a backyard party, but one bullet tells a completely different story. Strong language, some violence, and some descriptions of sex. 2010.

Count to Ten
By James Patterson and Ashwin Sanghi
CL16780 / DB89653
Santosh Wagh quit his job as head of Private India after harrowing events in Mumbai almost got him killed. But Jack Morgan, global head of the investigation agency, convinces Santosh to run the new office in Delhi. They take a case involving dissolved human remains found on government property. Unrated. Commercial audiobook. 2017.

The People vs. Alex Cross
By James Patterson
CL16789 / DB89732
Charged with gunning down followers of his nemesis, Gary Soneji, in cold blood, Alex Cross is being turned into the poster child for trigger-happy cops who think they’re above the law. Cross knows it was self-defense–but will a jury see it that way? Unrated. Commercial audiobook. 2017.