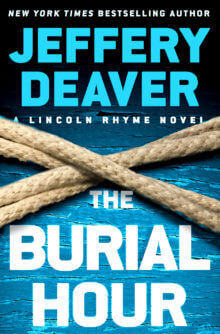 With rising temperatures the blood boils, and that is evident with these thrills coming in hot from the heavy hitters – Deaver, Baldacci, Patterson, Slaughter, and Cornwell. It doesn’t get any better than this. Some like it hot, let’s keep it 100 going into the summer months, and we’ll see you next time in the Top Five.

The Burial Hour
Jeffrey Deaver
DB 87484 / CL 16613
A businessman is kidnapped in broad daylight. A miniature hangman’s noose is left at the scene. A nine-year-old girl is the only witness. With a crime scene this puzzling, forensic expertise of the highest order is absolutely essential. Lincoln Rhyme and Amelia Sachs are called in. Unrated. Commercial audiobook. 2017.

The Fix
David Baldacci
DB 87562
Amos Decker witnesses a murder outside FBI headquarters. A family man shoots a female teacher execution-style, then turns the gun on himself. DIA agent Harper Brown orders Decker’s team to back off–the murder is part of an open investigation and is a matter of urgent national security. Unrated. Commercial audiobook. 2017. Private: The Royals
James Patterson
DB 87675
Private is the most elite detective agency in the world. But when kidnappers threaten to execute a royal family member in front of the queen, Jack Morgan and his team have just twenty-four hours to stop them. Or heads will roll–literally. Unrated. Commercial audiobook. 2016. Chaos
Patricia Cornwell
DB 86707 / CL 16389
Cambridge, Massachusetts, medical examiner Kay Scarpetta and Detective Pete Marino realize that there are a number of odd details surrounding the death of a British female bicyclist. Her death soon appears to be tied to the person who has been cyberbullying Scarpetta. Some violence and some strong language. Bestseller.  2016.