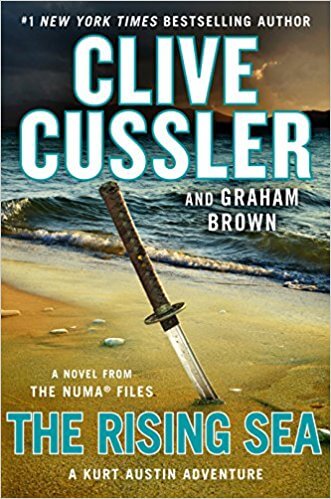 Here is our new Best of BARD list, starting with number 1!

If you find some of these titles interesting, and would like to listen to them, feel free to contact the Library for the Blind and Physically Handicapped.

An alarming rise in the world’s sea levels–much larger than could be accounted for by glacier melt–sends the NUMA scientific team rocketing around the globe in search of answers. What they find at the bottom of the East China Sea, however, is even worse than they imagined. Unrated. Commercial audiobook. 2018.

A few hours after Amos Decker and his FBI colleague Alex Jamison arrive in bleak Baronville to visit Alex’s sister, Decker stumbles on a horrific double murder scene. When the next killing hits sickeningly close to home, Decker finds that his previously infallible memory may not be so trustworthy after all. Unrated. Commercial audiobook. 2018.

An actress is killed with an icepick while watching a classic movie in a theater. Homicide detective Dallas is visited by a distraught novelist who published that exact murder scene. And this isn’t the first plot of hers to be copied. Strong language, some violence, and some explicit descriptions of sex. 2018.

The Perfect Stranger: A Novel
By Megan Miranda
DB88981

Forced out of journalism, Leah moves with former roommate Emmy to a small Pennsylvania town and a teaching job. But Emmy soon vanishes, a woman who looks like Leah is brutally attacked, and the police can’t find any proof that Emmy even existed. Strong language and some descriptions of sex. 2017.

A series of shootings exposes San Francisco to a methodical yet unpredictable killer, and a reluctant woman decides to put her trust in Sergeant Lindsay Boxer. The confidential informant’s tip leads Lindsay to disturbing conclusions, including that something has gone horribly wrong inside the police department itself. Unrated. Commercial audiobook. 2018.