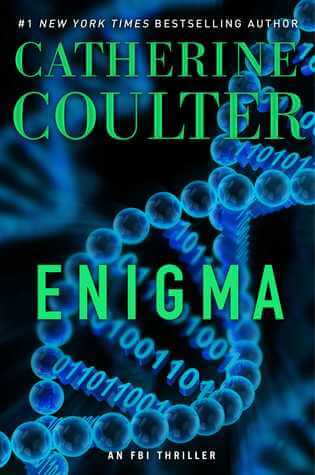 I’m not going to be hilarious today as I usually am. I think it’s the weather… Even the bus drivers are cranky, can you imagine?

It’s an enigma. Although, when I hear Enigma I usually think of coding and Alan Turing… Turns out there is a guy running around, trying to kill people, whose DNA is unlike any other, and he’s an Enigma! If you don’t believe me, check it out for yourself. Over and out.

Enigma
By Catherine Coulter
DB89922
Agent Savich rescues a woman in labor from a crazed man. The woman and her unidentified assailant–now in a coma–both enter the hospital, where he is almost killed and the baby is kidnapped. Meanwhile, two other agents search for an escaped convict in a national forest. Some violence. 2017.

Hidden History of Pittsburgh
By Len Barcousky
DBC10100
When Mark Twain visited in 1884, he claimed to spy a little bit of hell in Pittsburgh’s smoky appearance. Twain’s observations are among the many riveting firsthand accounts and anecdotes to be found in the archives of the Pittsburgh Post-Gazette. With this story and more from the archives, veteran journalist Len Barcousky shines a light on the hidden corners of Pittsburgh’s history. Some strong language. 2016.

Every Breath You Take: An Under Suspicion Novel
By Mary Higgins Clark and Alafair Burke
DB89876 / CL16765
Laurie Moran, producer of the true crime television series Under Suspicion, is irritated by her new show host Ryan Nichols’s insistence that they take on the three-year-old Met Gala murder of wealthy Virginia Wakeling. Virginia’s much younger boyfriend, who is Ryan’s personal trainer, wants to clear his name. 2017.

The Cuban Affair: A Novel
By Nelson DeMille
DB89340 / CL16725
Veteran “Mac” MacCormick runs a charter-fishing boat out of Key West. When approached by an anti-Castro attorney about taking clients on a mysterious trip to Cuba, his instincts tell him to decline–but the two-million-dollar payday is tempting. Strong language, some violence, and some descriptions of sex. Bestseller.  2017.

Unbound
By Stuart Woods
DB90002 / CL16846
Former CIA operative Teddy Fay–now a film producer known as Billy Barnett–takes some time to travel and grieve after a personal tragedy. While in Santa Fe for a visit with Stone Barrington and Ed Eagle, he finds an unexpected opportunity to exact quiet revenge for his recent loss. Unrated. Commercial audiobook. 2018.