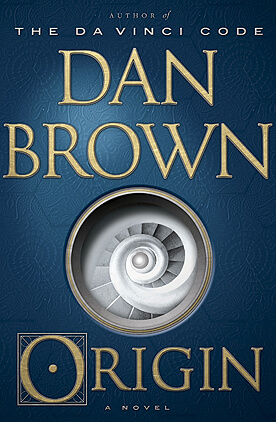 I would like to dedicate this blog to Ashlee and Eric.

Ashlee, I will miss your laugh and our talks on female emancipation, spirituality and weird people.

Eric, I will miss your giggle too. I won’t have anyone to share my Eastern European humor with because, obviously, no one understands it.

I wish you both the best of luck in your future careers, and I hope you will be surrounded by awesome people like me.

And this is our Best of Bard list for May, starting with number one:

Origin
By Dan Brown and Paul Michael
DB89199 / CL16703
Author of “The Da Vinci Code” (DB 55735) interweaves codes, science, religion, history, art, and architecture into this new novel. Harvard symbologist Robert Langdon is thrust into the dangerous intersection of humankind’s two most enduring questions, and the earthshaking discovery that will answer them. Unrated. Commercial audiobook.  Bestseller.  2017.

Night Moves: an Alex Delaware novel
By Jonathan Kellerman
DB90289 / CL16854
LAPD homicide detective Milo Sturgis needs the insight of psychologist Alex Delaware. A murder scene has no blood, no evidence of struggle, and, thanks to the victim’s missing face and hands, no means of identification. And no reason why the disfigured corpse has appeared in an upscale family’s home. Unrated. Commercial audiobook. 2018.

Fifty Fifty
By James Patterson and Candice Fox
DB90292 / CL16856
Her continuing attempts to clear her brother of murder charges have landed Detective Harriet Blue in a small Outback town. A diary found on the roadside outlines a shocking plan to massacre all seventy-five residents. And the first murder, shortly after Harry’s arrival, suggests that the clock is already ticking. Unrated. Commercial audiobook. 2018.

The Family Lawyer
By James Patterson and Christopher Charles
DB89190
In the title entry, Matthew Hovanes is living a parent’s worst nightmare: his young daughter is accused of bullying another girl into suicide. But this loving father is also a skilled criminal defense attorney, and something here doesn’t add up. Also includes “Night Sniper” and “The Good Sister.” Unrated. Commercial audiobook. 2017.

Hunted
By James Patterson and Andrew Holmes
DB90065
Someone is luring men from the streets to play a mysterious high-stakes game in the English countryside. Former Special Forces officer David Shelley will go undercover to shut it down, but this might be a game he can’t win. Unrated. Commercial audiobook. 2016.