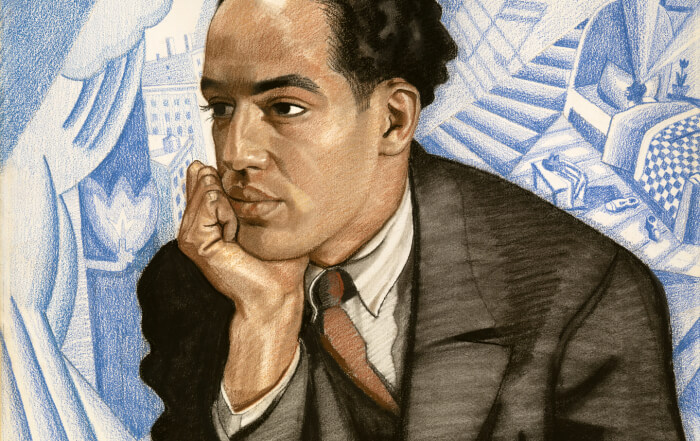 Langston Hughes was a poet, novelist, and playwright who captured and chronicled the collective and individual experiences of African Americans. First recognized as a literary figure during the Harlem Renaissance, Hughes was best known for his innovation of the art form called jazz poetry.

Hughes grew up in Lawrence, Kansas, where he lived with his maternal grandmother until the age of thirteen. Through the black American oral tradition and the activist experiences of her generation, Hughes’ grandmother instilled in her grandson a lasting sense of racial pride.

Langston was a vociferous reader from an early age. To stave off the loneliness he experienced as a child, he often occupied himself by reading. In his autobiography, The Big Sea, Langston writes, “Then it was that books began to happen to me, and I began to believe in nothing but books and the wonderful world in books—where if people suffered, they suffered in beautiful language, not in monosyllables, as we did in Kansas.” It was Hughes’ ability to represent another’s life experiences as full of struggle, but joy and beauty, too, that led others to refer to him as the “Poet Laureate of Harlem,” a title he encouraged.

Hughes read widely and deeply, responding to the work of those who came before him and setting the stage for those who would come after. Of the many poets and authors who had an influence on his writing, he cites Paul Laurence Dunbar, Carl Sandburg, and Walt Whitman as the most influential. His life and work were enormously influential during the Harlem Renaissance. An artistic, literary, and intellectual movement, the Harlem Renaissance provided varied opportunities for group expression and self-determination for African Americans living in Harlem and beyond. The parallel emergence of jazz and the blues, however, was rejected by many African Americans who considered it low class, secular, and morally disfiguring due to its association with drugs, alcohol, dancing, and other morally “loose” behaviors. Langston Hughes was the only black writer during the Renaissance who became truly taken with jazz; he infused his poetry with the sounds and feeling of the blues–its improvisational nature, syncopated rhythms, and repetitive phrases–creating a powerful challenge to the status quo.

Hughes described jazz as he saw it as “a montage of a dream deferred. A great big dream–yet to come–and always yet–to become ultimately and finally true…Jazz is a heartbeat–its heartbeat is yours.” Hear Hughes recite one of his most famous poems, “The Weary Blues” (included in DB 60761), set to the jazz accompaniment of the Doug Parker Band in the video below:

To read Langston Hughes’ poetry, request or download one of the many collections available from NLS:

I Wonder as I Wander: An Autobiographical Journey by Langston Hughes (DB 40144)
The African American poet recalls the 1930s in an autobiographical work. During the period, he traveled extensively at home and abroad, meeting people from all walks of life. He writes here about amusing moments, difficult situations, racial injustice, and his intense interest in the world as he saw it.

Other collections of Hughes’ poetry that are available from NLS include Langston Hughes (DB 60761), a recording of the artist’s poems and remarks in which each selection’s theme and context are discussed, and The Harlem Reader: A Celebration of New York’s Most Famous Neighborhood (DB 57319), an anthology of essays, articles, short stories, and poetry representing the diversity and creativity of historic and present-day Harlem.

Hughes described jazz as he saw it as “a montage of a dream deferred. A great big dream–yet to come–and always yet–to become ultimately and finally true…Jazz is a heartbeat–its heartbeat is yours.” Hear Hughes recite one of his most famous poems, “The Weary Blues” (included in DB 60761), set to the jazz accompaniment of the Doug Parker Band in the video below: