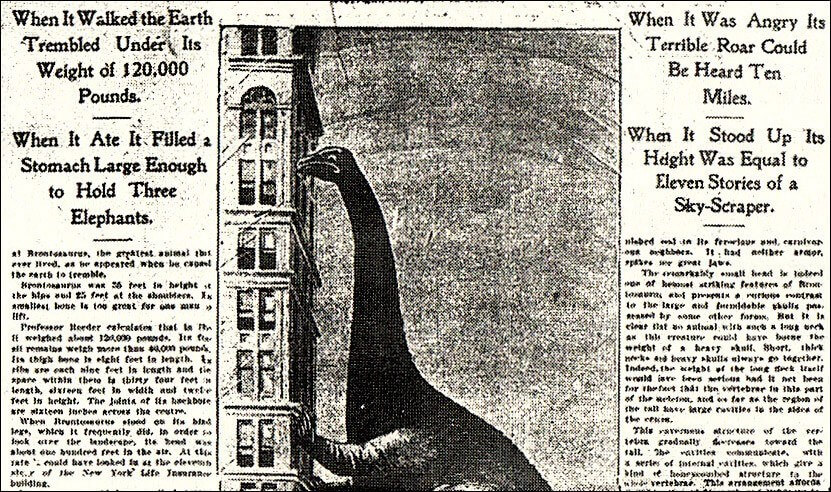 In April of this year an unusual item appeared for sale on Ebay:  the 15-foot, 68-million-year-old remains of a juvenile Tyrannosaurus rex, discovered in Wyoming, for the “buy it now” price of $2.95 million.  In the United States, unlike many other countries, fossil hunters who unearth skeletal remains on private land are entitled by law to keep (and sell) them.  Dinosaur trophies are much sought after by the ultrarich such as Leonardo DiCaprio, Harrison Ford and Nicolas Cage.  Last year a new species of carnivorous dinosaur was sold at auction for $2.36 million to a U.S. buyer who claimed his prize before scientists could study it.  The T. Rex on Ebay will also undoubtedly wind up in private hands, thus preventing scientists and the public from learning from it.

Contrast this with one of the most celebrated dinosaurs of all time, Diplodocus carnegii, named after industrialist and philanthropist Andrew Carnegie, which was bestowed to the Carnegie Institute in Pittsburgh in 1907, where it has mesmerized generations of a captivated public.  There it has also been available for study by the scientific community.  Of course we have Andrew Carnegie to thank for this public trust.

How this all came about is put forth in fascinating detail in Bone Wars: The Excavation and Celebrity of Andrew Carnegie’s Dinosaur by Tom Rea (DBC 01858), recorded by the narration program at the Carnegie Library for the Blind and Physically Handicapped.   Carnegie first read about the sensational dinosaur find in William Randolph Hearst’s New York Journal and Advertiser which heralded it as “The Most Colossal Animal Ever on Earth,” and immediately determined he had to have it.  The competition between institutions, paleontologists, and fossil hunters is laid out (so ruthless, that dinosaur remains were destroyed—“hewn into fragments”—rather than left for other collectors to find), along with information about industrial Pittsburgh, railroad deals, American and geologic history and of course dinosaurs. It profiles the shrewd and beneficent Carnegie, as well as the other ambitious players who combined efforts to make this the most successful and stunning acquisition of its day.

If you are fascinated by dinosaurs, as many of us are, this book may well be for you.