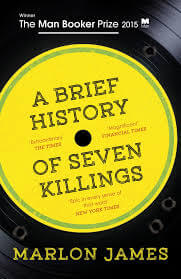 The Caribbean Sea is a relatively small geographic area but is filled with many islands and countries that are very rich in culture and diversity.  Many of these islands have also lived through much turmoil, poverty, and difficult political situations.  Below is a list of authors from various Caribbean countries that exemplify Caribbean struggles and Caribbean literary tradition.

Krik? Krak!  by Edwidge Danticat – DB 47187 – Ten short stories that reflect, to some degree, the violence and despair of the author’s native Haiti. “Children of the Sea” is an exchange of letters between a young woman and her lover, who is aboard a leaky boat en route to Miami. “Nineteen Thirty-Seven” describes the harsh treatment of a Haitian woman imprisoned for witchcraft. Winner of the 1995 National Book Award.

A Brief History of Seven Killings –by Marlon James – DB 79940 – Fictitious oral history that explores the events and individuals surrounding the attempted assassination of Bob Marley during the political turmoil in Jamaica during the late 1970s. Violence, strong language, and descriptions of sex. 2014.

In the Time of the Butterflies – by Julia Alvarez – DB 40316 – Set in the Dominican Republic under the regime of dictator Rafael Trujillo. In 1960 three of the four Mirabal sisters were murdered for their part in the struggle for freedom. The author, a refugee herself, recreates the lives of Patria, the eldest; Dede, the sole survivor; Minerva, wife of a revolutionary; and Maria Theresa, the diarist. Alvarez depicts the everyday lives of the women, martyred for their courage and beliefs. 1994.

When I Was Puerto Rican – by Esmeralda Santiago – DB 38181 -Autobiographical account evoking memories of the culture and freedom of a Puerto Rican barrio. Santiago and her ten younger siblings were brought to Brooklyn by their ambitious mother. Harsh as the new life is, it is made tolerable by Santiago’s storytelling ability. Bright, but unable to speak English, she is relegated to a class for learning disabled children. But prospects improve when she auditions for the performing arts school. Some descriptions of sex.

This list is by no means representative of the vast diversity in the Caribbean Sea.  There are many countries, islands, and ethnicities not represented.  What did I overlook?  Let me know in the comments what the next tropical title I read should be.