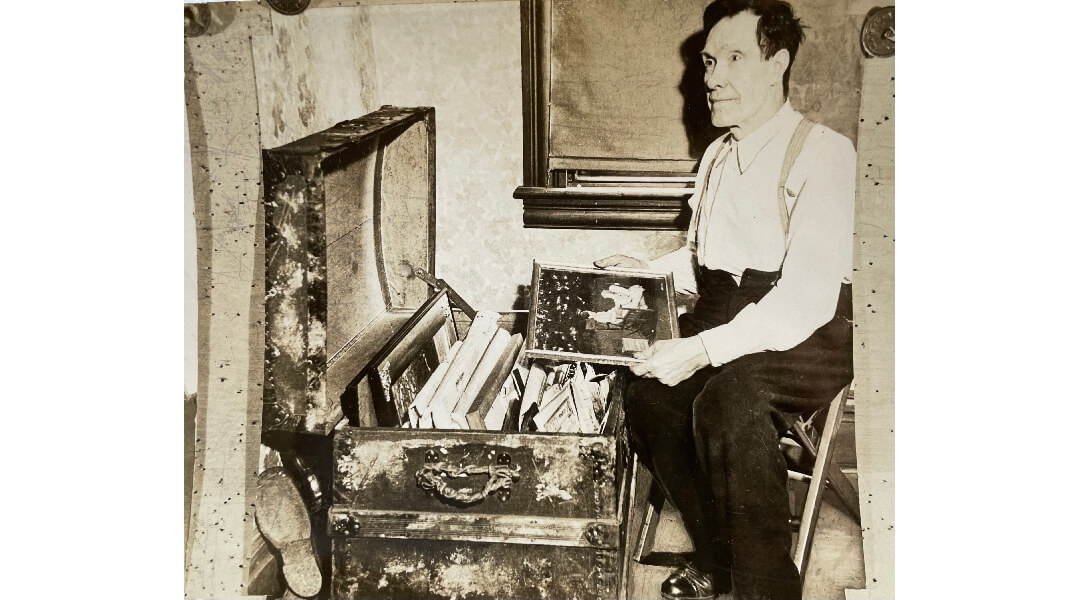 John Kane was a Scottish-born American immigrant, and fellow Pittsburgher, recognized for his folk-art or primitive style portrayed through American landscapes and portraits. The exhibit explores “the gripping story of a Pittsburgh immigrant who overcame poverty, tragedy, alcoholism, and other adversities to become one of the world’s most revered self-taught artists.” “Pittsburgh’s John Kane: The Life & Art of an American Workman“, now open at the Senator John Heinz History Center, features 37 of Kane’s original works of art, personal artifacts, and works by his contemporaries.

CLP-Main houses the Leon A. Arkus Collection of John Kane, 1931-1987 in Archives and Special Collections. Items from the collection are on display as part of the Heinz History Center’s current exhibit. The CLP collection is made up of three series compiled by Leon A. Arkus, former director of the Carnegie Museum of Art, Marie McSwigan, reporter for the “Pittsburgh Press”, and Margaret Corbett, daughter of John Kane.

Arkus compiled the collection during the research for his book “John Kane, Painter,” published in 1971. Corbett gave Arkus two of her own written works, which are also in the collection. The Kane collection contains correspondence, book chapters, and related materials created during Arkus’ research process. McSwigan’s manuscript version of her book “Sky Hooks: The Autobiography of John Kane,” along with two notebooks from her interviews with Kane are in the collection. The collection also includes correspondence between Kane and those interested in his work, untitled sketches, photographs, and two musical instruments along with other items. The collection’s finding aid is currently not available for online viewing; however, you can contact the library to learn more.

Kane was born in Scotland in 1860 to Irish parents and emigrated to the United States, specifically Alabama, in 1879. He worked in various labor positions in Alabama and moved to Western Pennsylvania in 1890 to join his family. In that time, he began to sketch local scenery and landscapes. In 1891, Kane lost his leg in a train accident. Through a series of serious life events, Kane continued to paint local urban and industrial landscapes, pastoral scenes, portraits, and historical motifs.

In 1927, Kane submitted his painting “Scene from the Scottish Highlands” to the jury of the Carnegie International Exhibition, a prestigious juried art exhibition based at the Carnegie Museum of Art. Despite his lack of formal training the painting was accepted by the jury. Kane had gathered the attention of other notable museums on the east coast and he became one of the most prominent self-taught artists at the time. Kane painted portraits of himself and others, however, his scenes of the Scottish immigrant community in Pittsburgh and industrial and pastoral landscapes secured his reputation in the art world.

Before his death in 1934, Kane received numerous honors and his work was exhibited in major museums throughout the United States and Europe. His style, use of flat colors, and meticulous detail are studied and appreciated in the art world today.

To learn more about John Kane, here are some additional resources:

*Caption for featured photo: Photograph of John Kane from Leon A. Arkus Collection of John Kane, 1931-1987 at Carnegie Library of Pittsburgh-Main.