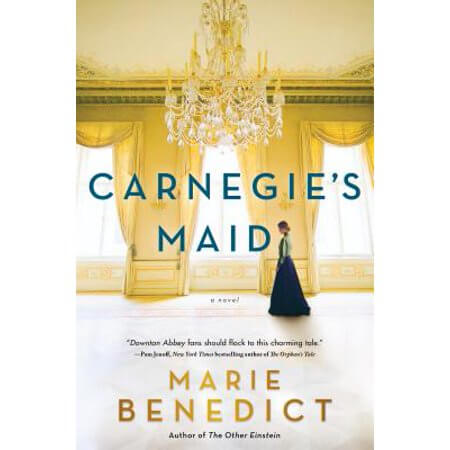 I read Carnegie’s Maid (DB 89953) an historical romance by Heather Terrell (writing as Marie Benedict) out of interest in that period in Pittsburgh’s history when Andrew Carnegie was ascending in wealth and power, and in the contrasts in society between the well-off classes and the immigrant working class.  On this score, the novel does not disappoint.  Ms. Terrell provides a thoughtful, detailed examination of these societal differences and of the apparent paradoxes in Carnegie’s nature — on one hand the ruthless business entrepreneur and later public philanthropist and benefactor.

The story revolves around Irish immigrant and plucky young heroine Clara Kelley, who, in 1863, through an improbable series of events, finds herself in service as lady’s maid to Margaret Carnegie, Andrew’s shrewd and demanding mother.   Andrew develops an early appreciation of Clara’s agile mind, and as their relationship develops in secret, he instructs her in his business ventures, valuing her observations and eventually capitalizing on her ideas.  This rang hollow to me, as did his eventual proposal of marriage, but the growing mutual attraction between the two characters and the impossible contradictions between their two worlds provide the tension and suspense that infuse the story.

In an interview with Rege Behe for TribLive, Ms Terrell explained, “I really did write this book not as a representation of one woman but as a reminder that all of us are immigrants.  And all of us played an enormous role in the building of this country.  We often hear the stories of a very few — usually men — who sort of fashioned our country.  But there are so many millions of unknown and silent immigrants who upon their shoulders our country was built.”  With respect to Carnegie’s later commitment to philanthropy — espoused in his 1880 article “Wealth” in the North American Review (and later published as “The Gospel of Wealth”) — Ms. Terrell employs an impassioned argument between Clara and Carnegie as the vehicle that brought about his changed outlook.  So the story is best appreciated as representing the larger issue of the struggles and contributions of 19th century immigrants to the growth of national industrial power and in this regard the novel succeeds.