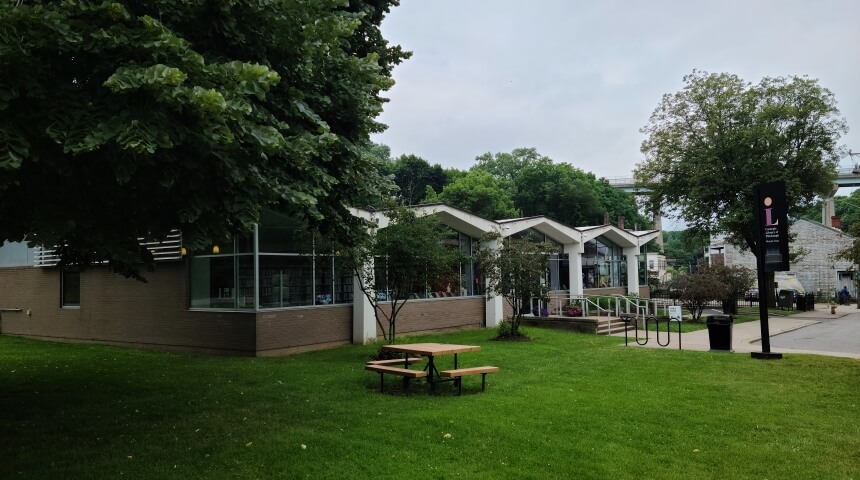 In 1916, the Carnegie Free Library of Allegheny City determined a need for a branch library to serve the diverse population of the western most extremity of Allegheny City. Conrad Dietrich Estate was chosen to build a 40 by 40 feet brick building near the corner of Woods Run Avenue on Brighton Road. The library leased this first building and equipped it with shelving to hold 8,000 books with table space for 60 readers.

When it opened on November 1, 1916 the Woods Run Branch circulated 14,930 books in the last two months of 1916. By the end of its first year, this tiny library registered over 2,230 new borrowers and they checked out over 74,607 books in 1917. The Woods Run Branch Library soon was a busy place. It hosted bi-monthly Story Hours often with over a hundred children in attendance. Imagine over one hundred children listening with rapt attention to a librarian reading Robinson Crusoe or Little Women for an hour at a time—I am not sure that would be possible today. The library organized boys’ and girls’ clubs and brought books to local schools and playgrounds for children and teens to check out. It became a gathering place and central hub of the Woods Run community, especially with its location right on the trolly route along Brighton Road. Within a few short years, the building was too small for the community’s use.

In honor of the 125 Anniversary of Carnegie Library of Pittsburgh, the Library wants to hear about how the Woods Run Branch has been a part of your life. We are hoping some of you will share your memories or stories with us and the wider community. If you have a memory to share or any photos of CLP – Woods Run, please stop by or send your library memories and photos to woodsrun@carnegielibrary.org.

We hope you will stop by the library and look at the pictures and memories shared. The Woods Run Branch is a small location but it lives BIG in the hearts and minds of its community.