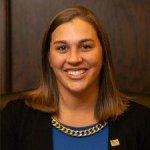 Allegheny County Councilperson, At-Large, Bethany Hallam is a native Pittsburgher. She graduated from North Hills High School in 2008, and from Duquesne University in 2012 with a B.A. in Public Relations and Spanish.

She has been a vocal supporter of all varieties of criminal legal reform since long before she was elected to office. During her ten-year battle with Substance Use Disorder, she had multiple run-ins with law enforcement that resulted in dozens of summary and misdemeanor convictions. She has paid tens of thousands of dollars in fines and fees, spent time on probation and in the Allegheny County Jail, and had her driver’s license suspended as a result of these convictions.

Councilperson Hallam ran for office as one of the first people in the country to do so as a formerly incarcerated person in long-term recovery from Substance Use Disorder, garnering nationwide attention and bringing the conversation of criminal legal reform more into the mainstream. She is now the youngest person to have ever been elected county-wide in Allegheny County, representing over 1.2 million people in one of the largest legislative districts in the nation.

Councilperson Hallam uses her position as an elected official to speak all around Pennsylvania about the unjust treatment of those in our criminal legal system and, specifically people of color and lower-income populations. Serving on Allegheny County’s Jail Oversight Board, she uses her lived experiences to advocate for better jail conditions. She also serves as the Chair of Allegheny County Council’s Appointment Review Committee, where she is working to ensure those appointed to the myriad boards, authorities, and commissions throughout the county are and remain committed to the vision of a more justice, equitable, and inclusive Allegheny County.