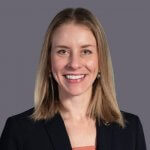 Erika Strassburger is a Member of Pittsburgh City Council serving District 8, which includes Pittsburgh’s Oakland, Shadyside, and Squirrel Hill neighborhoods. She was the first woman elected to this seat. Previously, Erika served as Chief of Staff for the district under former-Councilman Dan Gilman. She spent nearly a decade as an environmental organizer and advocate in Pittsburgh and New Hampshire focused on clean energy, clean air, and climate issues.

In addition to the Carnegie Libraries of Pittsburgh, Erika serves on the board of Carnegie Museums of Pittsburgh, the Pittsburgh Water and Sewer Authority, the Squirrel Hill Health Center, and the PennEnvironment Research & Policy Center.

Erika holds a degree in Environmental Studies and a minor in International Relations from Bucknell University.