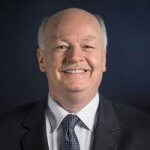 Gregory A. Zovko is the retired vice president & controller of the United States Steel Corporation. He joined U.S. Steel in 1983 as a management associate in the accounting and finance department at its Mon Valley Works near Pittsburgh. During the next 14 years, he progressed through a series of increasingly responsible positions in corporate audit and accounting before being named controller for Mon Valley Works’ Clairton Plant in 1997.

Gregory moved back to headquarters in 1998 to serve as manager-financial analysis, and one year later, he was named controller for the entire Mon Valley Works. In 2002, he returned to headquarters when he advanced to assistant controller-operations accounting & financial analysis. He was named controller-flat-rolled products & assistant corporate controller in November 2007. Gregory was elected vice president-accounting in June 2008 and oversaw accounting functions for all of U.S. Steel’s business units, including North American flat-rolled and tubular as well as European operations and also directed financial analysis activities. He was appointed to the vice president & controller position in April 2009, adding the role of chief compliance officer to his responsibilities. He retired from U. S. Steel in June 2014.